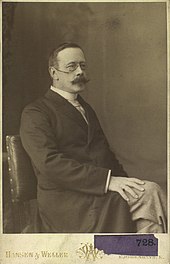 Hans Christian Joachim Gram (born September 13, 1853 in Copenhagen , † November 15, 1938 ibid) was a Danish bacteriologist . Today he is best known for his staining method for bacteria, the Gram stain named after him . This allowed bacteria to be more effectively differentiated or classified with the aid of microscopes. To this day, it is a laboratory diagnostic standard to make bacteria more visible and distinguishable under the microscope.

Grams father was Fredrik Terkel Julius Gram (1816–1871), a professor of law and his mother was Louise Christiane Roulund. He first studied botany in Copenhagen up to a Bachelor's degree. From 1873 to 1874 he was assistant to the zoologist Japetus Steenstrup . He later also studied medicine , at the University of Copenhagen until graduation in 1883. From 1883 to 1885 he was in Berlin, where he deepened pharmacology and bacteriology. In 1884 in the Berlin Municipal Hospital, Gram, in collaboration with Carl Friedländer, found a way of staining the pathogens causing pneumonia Streptococcus pneumoniae (gram-positive) and Klebsiella pneumoniae (gram-negative) differently . He spent the next few years as an assistant in the hospital.

In 1891 he became a lecturer and in the same year received a professorship for pharmacology , from 1900 professor for medicine in Copenhagen. He was married to Louise IC Lohse from 1889 until she died 11 years later. After he retired in 1923 he studied the history of medicine.

The reason for the intensive research into staining methods for bacteria at the end of the 19th century was their poor visibility in bright field microscopy . It was only with the development of phase contrast in the 1930s that they became visible without color.

Hans Christian Gram developed the staining method as an employee at Carl Friedländer in Berlin. He was looking for a staining method with which bacteria could be displayed in animal tissue, i.e. stained in a contrasting way to the tissue cells. The found staining method, published in 1884, was only successful with some bacteria, the gram-positive ones. Émile Roux applied the method to differentiate gram-positive and gram-negative bacteria by dyeing, in particular to determine gonococci (gram-negative in contrast to many other cocci) (published in 1886).

This staining method is based on a difference in the cell wall structure of bacteria that was unknown at the time. Gram-positive bacteria have a thick cell wall, mainly consisting of a multilayered layer of murein . Gram-negative bacteria only have a very thin wall made up of a single or thin layer of murein, and they also have a second lipid membrane similar to a cytoplasmic membrane outside the cell wall. When staining with gentian violet , a water-insoluble iodine-dye complex is formed with iodine-potassium iodide solution ( Lugol's solution ) within the cell. This can be washed out of gram-negative bacteria with ethanol. However, ethanol cannot penetrate the thick cell wall of the gram-positive bacteria, so the iodine-dye complex remains in these cells. To stain the other, gram-negative bacteria, counterstaining with safranin or fuchsin is used.