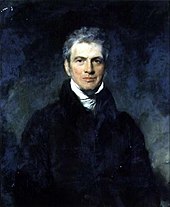 He was born Harford Jones and was the son of Winifred and Hardford Jones of Presteign. While working for the British East India Company , he acquired knowledge of oriental languages .

He was a crown attorney and doctor of law . On October 9, 1807, the title of Baronet , of Boultibrook in the County of Hereford , was created for him. From 1807 to 1810 he was Envoy Extraordinary ( envoy extraordinary ) and Ministre plénipotentiaire of George III. at the court of Fath Ali Shah in Tehran .

On May 4, 1826, he added his family name to Jones-Brydges after his maternal grandmother . In 1831 he received an honorary doctorate (DCL) from the University of Oxford . In 1832 he was sworn in as a member of the Privy Council . In 1842 he was appointed Deputy Lieutenant of Herefordshire. He was a staunch Whig , campaigned in the Radnorshire constituency, and was organized in the Gray Coat Club .

He died in 1847 on his country estate in Boultibrook near Presteigne. From his marriage to Sarah Gott, daughter of Sir Henry Gott from Newland Park in Buckinghamshire and widow of Robert Whitcomb from Whittern in Herefordshire, he left two daughters and a son named Harford James Jones-Brydges (1808-1891), who inherited his title of nobility .