Haus Lorenz is one of the Lößnitz winegrowers' houses , it is in the Radebeul district of Oberlößnitz at Weinbergstrasse 28. It is named after the owner family Oswald Lorenz. This owned the property from 1891 to 1937 and operated a gardening shop there from around 1900. 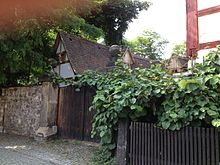 Gate on the left

Details of the framework and painting

The half-timbered house , now a listed building , listed as a characteristic example of its kind in the Dehio, was built around 1680. The present-day, almost originally preserved state corresponds to the appearance of around 1800, which has been carefully restored since 1998. The two-storey winegrower's house has a high, tiled hipped roof covered with hand- painted beaver tails , a ridge frame construction with central longitudinal girders, which is still original except for the frame . The long side of the house facing the street is directly on the line of alignment of the natural stone walls that adjoin the street on the right and left. In these there is a gate in the west between two sandstone pillars with spherical attachments.

On a sandstone-vaulted cellar, which takes up about two thirds of the floor plan and in which there are still the sandstone benches for the wine barrels, there is a largely solid ground floor made of quarry stone, in which there is the press room , the winegrower's apartment with a black kitchen and two living rooms and two small animal stalls.

The upper floor, which can now be reached via a wooden staircase, contained the apartment of the vineyard owner, which was probably originally accessed via an arcade to the north, as indicated by the roof, which is now towed to the north. In addition to the actual apartment, there is also a hall on the upper floor that preserves the remains of the original painting.

On a map by Hans August Nienborg from 1714, the first winegrower's house is already marked at this point. Around 1800 the winegrower's house corresponding to the condition shown today was built from it, which in 1813 in a note from Oberrittmeister v. Carlowitz , the owner of Haus Friedland in Bennostraße at the time, was mentioned as a new building.

Since the property had its own well, it was the only one on today's Weinbergstrasse that was not connected to the historic wooden Straken water pipe to Hoflößnitz, which was put into operation in 1625 .

The nursery on the property was operated until 1992 and then given up. In 1998, the renovation began, which included the removal of the boarding that had been in place up until then and reopening of various clogged windows.

In 2010, the builders received the builder award from the city of Radebeul for the exemplary renovation. Haus Lorenz is one of five buildings in Radebeul that received direct funding from the German Foundation for Monument Protection (as of 2016: Haus Flywedel , Mohrenhaus , Meinholdsches Turmhaus , Haus Lorenz, Radebeul Ost cultural station ).