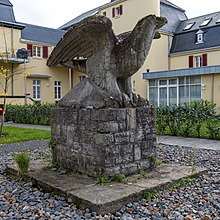 Sculpture in the courtyard

The Venauen house is a former aristocratic residence in Rösrath , whose origins go back to 1555. The building is a listed building and has been converted into condominiums after extensive restoration.

In 1555 Peter von Bellinghausen started a construction near Finawen (Venauen). Finawen means swampy meadow . The Sülz flows past 150 meters away. In 1596 it is mentioned that Venauen was allodial , i.e. not subject to any feudal association. From 1617 to 1638 Venauen appears on the knight's notes as an item eligible for the Landtag . In 1669 Venauen became the property of the Bertolf von Belven family, descendants of the Aachen mayor Johann Bertolf and his wife Nese Polleyn von Kettenis at Gut Belven. Around 1670, under Johann Karl Bertolf von Belven, the house was rebuilt, which basically corresponded to the state of construction that existed until the beginning of the 20th century.

Another dynasty change brought Venauen into the possession of the von Francken family. The first Herr von Venauen from this family was the Electorate of Cologne Major Johann Werner von Francken (1706–1769), the last was Karl Philipp von Francken (1784–1814). In terms of its buildings, the aristocratic seat was designed for an agriculturally oriented property structure. The two side wings of the complex with their exclusively agricultural rooms are evidence of this. The Venauen house, which looked quite modest in the 19th century and in which primarily bourgeois owners now alternated, only became a truly representative building when Felix Mayer took it over. Together with his wife Kathinka geb. In 1907, Neven DuMont had it redesigned by the Cologne architect Heinrich Müller-Erkelenz in the taste of the so-called Heimatstyle into an upper-class villa, which he himself described as a manor .

From 1938 to 1945 the building was used for a Gau school of the National Socialist People's Welfare . From 1950 a Belgian boarding school and grammar school was housed on the site (French: Athénée Royal ). While the boys had their bedrooms in Venauen, the girls were initially accommodated in the nearby Eulenbroich Castle. Until 1963, the Atheneum was headed by a French-speaking prefect. The language dispute between Flemings and Walloons also had an impact on the Rösrath Atheneum. In 1963 the Flemings insisted on setting up a separate Dutch-speaking section. The Flemish part was then completely relocated to Bensberg Castle by 1966 .

After the Belgians withdrew in 2003, there were plans for a commercial site and a nursing home. From 2004 to 2012, an adjoining building was occupied by the Martin Luther King School (special needs school of the Rheinisch-Bergisches Kreis with a focus on emotional and social development).

The building complex was completely renovated from 2012 to 2013. The castle's premises were converted into 17 condominiums.

The eagle sculpture in the courtyard is a relic of the property's National Socialist past. As a Gau school of the National Socialist People's Welfare, the palace was designed in accordance with the regime's “indoctrination claim”. This also included the eagle sculpture erected for the inauguration of the Gau School in 1938. Today the sculpture is one of the listed parts of Haus Venauen. At the suggestion of the Rösrath History Association, an information board should provide information about the historical past of this sculpture.

The house was included in the list of listed buildings of the city of Rösrath as monument no .

The house was presented to the public in November 2013 as "Monument of the Month". With the aim of bringing the concerns of monument protection and local historical research into the consciousness of the citizens, the “Monument of the Month” brings ten monuments or objects worth seeing in the city of Rösrath into the public eye every year. The selection of the monuments is made by a committee consisting of representatives of the city council, the city administration, the history association Rösrath and an expert citizen.

Castles and palaces in the Rheinisch-Bergisches Kreis