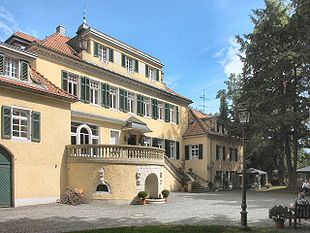 Eulenbroich Castle is located in Rösrath on a tributary of the Sülz and is known as the “Rösrath Good Room”.

In excavations they discovered remains of a first castle from the 13th century. Nothing is known about the residents. It was not until 1401 that the Staël von Holstein family was documented as owners. She lived in the moated castle until 1762 and built the second castle complex, with a manor house , stables for the cattle, apartments for the servants, an outer bailey and moats .

In 1762 Johann Werner Freiherr von Francken bought the property from the neighboring Venauen house . In the era of the Francken family, the medieval castle complex was transformed into a neat little baroque-style castle .

When the Cologne manufacturer Robert Rohr took over the aristocratic residence, he first had to extensively restore it before he was able to set up his official residence in the castle as Mayor of Rösrath in 1851. As mayor for life he was in office until 1878.

In 1908 Emil Biedermann moved into Eulenbroich, who built a leather factory right next door. He commissioned the Cologne architect Hermann Eberhard Pflaume (nephew of Hermann Otto Pflaume ) to transform the castle into a stately bourgeois villa . In particular, the harmonious extension of the manor house by a winter garden on the east facade was designed according to his plans.

After the Second World War , the facility served as a boarding school for Belgian schoolgirls who went to school in the neighboring Venauen house. From 1955 the building stood empty for a long time until a private retirement home was established in 1969. After the then community of Rösrath took over the property in 1981, it required a thorough renovation before the house was opened to the citizens in 1984.

The outer bailey, today's gatehouse of Schloss Eulenbroich, goes back to a new building from the 18th century. An arch bridge made of bricks bridges the upstream moat, which is fed with water from the Sülz. With regard to the central axis of the entire building complex, the bridge, the gatehouse and the mansion behind are aligned exactly in the middle.

The color of the wooden entrance gate is, as is usual with half-timbered houses in the Bergisches Land , typically "Bergisch green".

The keystone of the archway shows the coat of arms of the builder Johann Werner Freiherr von Francken. The gatehouse is the symbol of the city of Rösrath. It can be seen as a logo on the city administration's letterheads and also on the city's website.

Gatehouse as a poster motif

The Rösrath History Association has its headquarters in the gatehouse, which is equipped with a vaulted cellar.

At the beginning of the 1990s, the television gardener Elmar Mai was supposed to shoot a report for West German Broadcasting on the subject of “face-to-face exchange”. Since there was no plant exchange market at that time, he organized it himself for the first time in the inner courtyard of Eulenbroich Castle. Since then, plant enthusiasts have been able to exchange anything that has roots and leaves at plant exchange sites. Only paying with money is frowned upon.

Eulenbroich Castle served as a film set for the crime scene crime thriller with the episode title Satisfaction . In the 678th episode, first broadcast on October 28, 2007, a nocturnal scene takes place on the pedestal of the two-flight flight of stairs with balusters at the entrance to the manor house.

With regional funding from the Regionale 2010 , an educational workshop with rooms for events and a café with outdoor catering was built next to the castle. In the educational workshop, extracurricular educational offers for schoolchildren are offered as part of the KennenLernenUmwelt project . Schloss Eulenbroich functions as a dance, theater and music workshop in the supraregional project and offers workshops for students in grades one to thirteen. In 2018, the project was nominated as one of three projects nationwide for the future award "Olympus" in the competition "Children to Olympus", which is advertised by the cultural foundation of the federal states and which honors cultural education through cooperation between schools and culture. The nomination was accompanied by an invitation to the award ceremony in the presence of the patron, Federal President Frank Walter Steinmeier, on July 10, 2018 in Berlin. Since January 2019, the place of education has also been dedicated to the topic of media. As a result, the location was renamed the performance and media workshop.

Castles and palaces in the Rheinisch-Bergisches Kreis