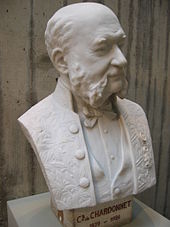 Comte Hilaire de Chardonnet (Louis-Marie Hilaire Bernigaud de Chardonnet; born May 1, 1839 in Besançon , † March 12, 1924 in Paris ) was a French chemist and industrialist and became famous for the invention of artificial silk .

Chardonnet was actually a civil engineer , but worked for Louis Pasteur . Chardonnet became aware of Pasteur's studies on diseases of the silkworm . He then looked for an artificial substitute for silk that could not be affected by disease. In this context, he examined the secretion of the silkworm and its rapid solidification into a thread. This is said to have given him the idea of ​​contrasting natural silk with a material produced in a corresponding chemical way. Its starting point was mulberry leaves, the food of the silkworms. Using nitric and sulfuric acid, he transformed this into cellulose nitrate and made fibers out of it.

Chardonnet not only had to develop a chemical process for the realization of his idea, he also had to create the mechanical prerequisites for a process that could be implemented in production. On November 17, 1884, he presented his results to the Academy of Sciences in Paris and received the first of his 48 patents on November 17 of the same year.

The original fibers were extremely flammable because of the nitro groups present in the cellulose molecule. To solve this problem, he adopted the denitration process developed by Joseph Wilson Swan, for which reducing sulfur compounds were used. However, the fiber properties were considerably impaired, which resulted in a loss of strength and elongation.

In 1889 the artificial silk was shown for the first time at the Paris World Exhibition and was a sensation at the time. At that time it was called “Chardonnet silk”. He did this by twisting nitrate cellulose into Chardonnet silk, the first industrially produced synthetic fiber and a precursor to rayon, nylon and dacron .

Chardonnet opened factories for the production of rayon, the first of which in 1891 in his hometown of Besançon. Chardonnet was not granted long-term economic success; its artificial silk had to give way to fibers of the same type produced using other processes. He died largely penniless and forgotten in Paris in 1924. He had sacrificed his not inconsiderable fortune to realize his idea. In the year of his death, the last of the factories that had operated according to his method had to be closed.

Incidentally, Chardonnet is one of the candidates for Fulcanelli's true identity .

In 1919 he was elected a member of the Académie des Sciences .