A high-voltage cascade , also known as a Cockcroft-Walton generator , Villard multiplier circuit or Siemens circuit , is an electrical circuit that converts an alternating voltage supplied into a high direct voltage of up to a few megavolts . It is one of the charge pumps and is based on the Greinacher circuit , which in its basic form is a voltage doubler . The high voltage is generated by cascading , i.e. H. Multiple series connection of the Greinacher circuit achieved.

In the early 1930s, John Cockcroft and Ernest Walton developed a type of particle accelerator that was later named after them on the basis of such a cascade and were thus able to demonstrate for the first time a nuclear reaction triggered by artificially accelerated particles .

For powering larger voltage multiplier as for the Cockcroft-Walton generator to test transformers used equivalent power.

The mode of operation is explained below using a two-stage cascade. The colors symbolize the polarity (red = plus, blue = minus). The capacitors with an odd number form the so-called push column , those with an even number form the smoothing column . 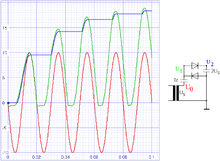 Simulation of the single-stage Villard cascade

In practice, of course, the capacitors are discharged when other capacitors are being charged, and there are also losses due to the diodes. Thus, the full output voltage is far from being reached after four half-waves.

Often the diodes are drawn diagonally and also installed.

High-voltage cascades use stages that only pass the peak values ​​of the positive half-wave upwards. The frequency of the residual ripple of the direct voltage is therefore the same as that of the feeding alternating voltage. However, the AC voltage source must deliver current during both half-waves.

High-voltage cascades also work with highly asymmetrical, rectangular alternating voltages. One example is the cascades used in televisions to generate the anode voltage of the picture tube (approx. 27 kV). Here the very high voltage pulse of the flyback transformer is used , which occurs during flyback, to reduce the magnetic field of the horizontal deflection coil. As a result, the cascade can be fed with relatively few coil turns. In newer television sets with a picture tube, there are somewhat modified high-voltage cascades: The high-voltage winding of the flyback transformer used to generate the acceleration voltage is divided into several partial windings, each of which supplies a single rectifier circuit. These individual DC voltage sources are connected in series together with the transformer in a potted housing. The complete component is called a diode split transformer (DST). The advantage of a DST compared to a conventional cascade is the lower internal capacitance within the partial windings, the short-circuit strength and the lower insulation load and size of the winding. However, on the high-voltage side, the process requires partial windings that are increasingly better insulated from the ferrite core. This is achieved by potting with synthetic resin under vacuum.

Cascades with air insulation are more problematic. The arrangement of the components is based on the pitch and creepage distances between the connections. Disc-shaped capacitors are often stacked on top of one another and the diodes are in a zigzag shape between them. This design can also be designed spatially (3 thrust columns) for operation on a three-phase transformer.

If two cascades are connected in parallel at the high-voltage end, each of which is fed from two windings with a phase angle rotated by 180 ° to one another, a lower residual ripple of twice the feed frequency is achieved.

Air-insulated cascades require rounded edges in the area of ​​the upper voltage levels from around 40 kV and further measures for field control, such as rounded hollow bodies at the high-voltage end, from around 100 kV.

If short, high voltage pulses are required instead of high DC voltages, so-called surge generators such as the Marx generator , with applications in the area of electromagnetic compatibility , are used.