A hockey stick or hockey stick is the essential piece of equipment in hockey sports such as hockey (field, hall), ice hockey , roller hockey and inline hockey .

In all of these sports the hockey stick is held in both hands (usually both) and is used to play the ball or puck . In principle, in all sports it consists of a long handle and a curved or angled element at the lower end. The actual ball contact is usually made with this club or trowel. In the details, however, the club construction differs considerably.

An old wooden hockey stick without a cover

Hockey in the modern sense has been around since around 1886, first in England . Originally there were 6 rules regarding the hockey stick.

For a long time hockey sticks were only made of wood , but now they are also made from fiber- reinforced plastics reinforced with carbon or aramid fibers . The advantage of compound clubs is greater durability, malleability (especially in relation to the leader ) and rigidity.

In the 1980s, attempts were made with clubs that contained a (replaceable) club made of aluminum. These were forbidden, however, as the aluminum club combined very high acceleration with poor ball control and thus increased the risk of injury too much.

The length of the stick is measured in inches . The standard adult size is 36.5; According to the rule of thumb that it should go to the navel, there are also shorter sticks for children and longer sticks for tall players. The racket shows a bend (curvature of the inside) at the transition to the club. This is called the instep and since August 2006 must not be more than 2.5 cm. The club itself has a flat and a rounded side, and you can only play with the flat one. 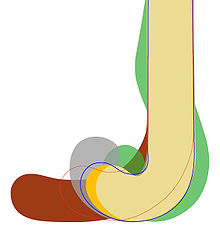 In field hockey, the rounded side is reinforced with a massive curvature in order to enable hard hits through the resulting lever and to make the club more resistant. While the club was originally curved rather thin and long, playing on artificial turf has made it a much shorter and slightly wider club. This makes handling the ball easier, especially stopping with the backhand .

There are now a number of different versions of the club that are adapted to the respective use by strikers, midfielders, defenders and goalkeepers. The J Hook , the Shorti , the Midi and the Maxi should be mentioned in particular .

The diameter of the club is regulated to prevent extremely thick clubs; the club must fit through a 5.1 cm inner diameter ring.

The stick in indoor hockey has a less thickened back of the club, as hitting is not allowed in the hall. The thinner club is better suited for flicking because it has to be partially brought under the ball when flicking. 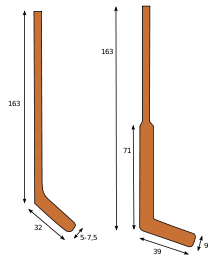 In ice hockey , the stick is much longer and more angular. The blade is curved either to the right or to the left, only beginner clubs are straight. Contrary to popular belief, the choice of the curvature of the club is not clearly correlated with the handedness. Samples of athletes show almost an even distribution in the blind grip on the sports equipment. The statistics for right-handed and left-handed people differ. Left-handers almost invariably reach the top of the club with their left hand.

The shaft is mostly made of wood, but also other materials such as composite materials. Nowadays, aluminum clubs are no longer allowed to be sold because - if they should break - they represent too high a risk of injury. Only the "remaining stocks" may still be loaded. Today the clubs are often made of carbon fiber reinforced plastic (CFRP, also called composite carbon), wood or a composite mixture. When it comes to hockey sticks, you choose between shafts, blades and sticks. For higher quality clubs, the blade is usually made of laminated composites such as GRP or CFRP.

Inline skater hockey and inline hockey are similar to ice hockey and the sticks are no different. However, not all of them are suitable for use on rougher ground, as wooden trowels, for example, wear off quickly; there are clubs with a durable plastic insert in the blade.

The length of the club depends on the size of the player, the shaft is shortened accordingly. This also has an impact on the spring force of the racket, which plays an important role when shooting - this is why the respective suspension hardness for the various lengths is indicated on high-quality rackets. There are special children's rackets for children that have a thinner and more elastic shaft.

Unicycle hockey is also played with ice hockey sticks, but not with a puck, but with a ball.

The floorball stick is in two parts (blade, shaft) and is made of plastic , whereas higher quality floorball sticks have a conical shaft made of CFRP (with a matrix of epoxy resin or polyester resin , usually reinforced with titanium or boron). In addition, the more expensive shafts have a fine carbon coating. The blade screwed on there is a wear part that is manufactured from thermoplastics in an injection molding process. An end cap and a grip tape complete the floorball stick. According to the International Floorball Federation (IFF), such a stick must not be longer than 105 cm and not heavier than 380 grams and is therefore shorter than an ice hockey stick .

When roller hockey both sides of the racket may be used, the material is arbitrary, the length is between 90 cm and 115 cm.