Holyhead [ ˈhɒlihɛd ] ( Welsh Caergybi [ kɑːɨrˈɡəbi ], "the fortress of St. Cybi") is a small town in the British county of Anglesey off the Welsh coast.

Although Holyhead is the county's largest city with a population of 11,237 ( 2001 census ), it is not the area's capital. The city is also not on the island of Anglesey , from which the name of the county is derived, but on Holy Island , an island connected to Anglesey by the Four Mile Bridge and the Stanley Embankment . 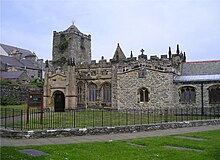 The center of the city is built around the church of St. Cybi, which is located within a Roman fortress from the 4th century. In contrast to most of the other fortresses from this time, this one only consists of three walls, the fourth side was protected by the sea. However, there is evidence that prehistoric settlements have existed in this area . 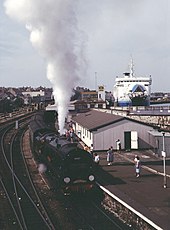 Harbor and western part of the station, 1989

Holyhead also has a long history as a port. There is evidence that people have been sailing between Holyhead and Ireland for over 4,000 years. The place became particularly important as a port at the beginning of the 19th century when Thomas Telford laid the post road from Holyhead to London , via which the mail was then transported to and from Dublin. With the construction of the railway line from London to Liverpool , Holyhead temporarily lost this function to the port of Liverpool in 1839, but was able to regain it in 1850 after the completion of the Chester and Holyhead Railways and Holyhead station. The name of the original Irish folk band Paddy Goes to Holyhead also refers to the “paddies”, emigrants from Ireland , for whom Holyhead was often a stopover when emigrating .

The city's importance reached its peak, also in the 19th century, when a breakwater was built here to provide a safe haven for ships that got into stormy seas on their way to Liverpool or Lancashire .

Today the aluminum industry is very important to Holyhead's economy . There is a large aluminum smelter on the outskirts of the city and a plant for processing bauxite nearby . In the port, the raw materials for this production are delivered from Jamaica and Australia and delivered to the plants via an underground transport system.

The town is known as the end point of rail and road and as a port for the ferries of Stena Line and Irish Ferries to Dublin in Ireland . The crossing to Dublin takes around three hours (with the fast ferry: around two hours).

Wales is closest to Ireland at the headland, the South Stack , about three miles west of the city center. This is where the huts of the Holyhead Mountain Group are located .

The headland, populated by many seabird colonies, is also home to an observation post of the British RSPB ( Royal Society for the Protections of Birds ) together with the publicly accessible observation tower Ellins Tower . A few hundred meters further north, the lighthouse built in 1809 comes into view. On the coastal road from the headland to Trearddur, six kilometers to the south, there are several natural bathing bays with sandy beaches between the cliffs.

An LPG tankers from Maersk bears the ship's name Holyhead.