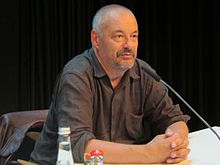 Jeunet made his feature film debut in 1991 with the film Delicatessen , which he directed together with Marc Caro . As early as the 1980s, Jeunet and Caro had made a number of short films, some of which were highly acclaimed, music videos and commercials, including The Escape and The Merry-Go-Round , for which they received a César in 1981 . After the two dark and bizarre fairy tales Delicatessen and The City of Lost Children (1995), Jeunet was won over for the sequel to Alien , Alien - The Rebirth (1997), which received very controversial criticism. There are different interpretations of commercial success. The cinema fanzine Film-Zeit.de speaks of the most successful film in the original Alien series. As usual, it was apparently not taken into account that there were almost 20 years between the productions of Alien and Alien - Die Wiedergeburt . According to an inflation-adjusted list on Box Office Mojo , Alien - The Rebirth is in last place in the US comparison, which is led by the first part by a large margin. After four years he made The Fabulous World of Amélie , his greatest success to date. In 2004 Mathilde followed - a great love .

Jeunet received the offer to direct the blockbuster production Harry Potter and the Order of the Phoenix , but he declined. Jeunet would also direct the film Life of Pi: Shipwreck with Tiger . However, after "wasting two years of his life on this project," the direction was turned over to Ang Lee . Fox Studios was Jeunet's budget ($ 85 million) too high. Ang Lee's version ended up costing $ 120 million.

Jeunet is considered to be a rather slow-working director who spends a lot of time on details and original design. The production of his films therefore usually takes several years. A number of actors enjoy working with him again and again, including Jean-Claude Dreyfus , Dominique Pinon and most recently Audrey Tautou .

In 2009 he shot a commercial for the perfume Chanel Nº 5 , in which Audrey Tautou also played. This short film, almost two and a half minutes in length, also corresponds to his typical cinematic style.

His last feature film, The Map of My Dreams , is an adaptation of the novel of the same name by Reif Larsen . It premiered in October 2013 and started on July 10, 2014 in Germany.