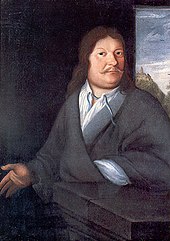 The son of the Erfurt town piper Christoph Bach and his wife Magdalena, b. Grabler, received a musical education in Arnstadt at the age of nine , remained in Arnstadt for a few years after his father's death (1661) and then went on a journey as an art piper. In 1667, like his father, he joined the Erfurt Council Music, which was then directed by his uncle Johann . Johann Ambrosius married Elisabeth Lemmerhirt from Erfurt in the merchant church , from whose family the uncle Johann Bach had already married a woman. He lived at Junkersand 3. In 1671 he moved to Eisenach as court and town musician, where his son Johann Sebastian Bach was born.

It is not known whether Ambrosius composed, at least nothing has survived. In the only surviving document of the wedding song "My friend you are beautiful" by his brother-in-law Johann Christoph Bach , which was premiered on the occasion of the wedding of his twin brother Johann Christoph Bach the Elder , the handwriting of Johann Ambrosius Bach can be found on the instrumentation of the violin. He is important as the founder of the collection of compositions by the older Bach family , which later became known in the music world under the name Altbachisches Archiv and has been preserved in the archive of the Sing-Akademie zu Berlin since the beginning of the 19th century . Ambrosius Bach seems to have brought Eisenach music to a level previously unknown. In any case, the testimonies received about him are full of praise:

"[Ambrosius Bach] has become so qualified in his profession that he can come up with both vocal and instrumental music for God's service and honest meetings with high and low class people, so that we and our local Orths do the same as far as we can not remember."

"In 1672 the new househusband struck on Easter with organ, violins, singing and trumpets and with army drums so that no cantor or houseman would not happen because Eisenach had confessed."

The marriage with Elisabeth Lämmerhirt resulted in eight children, five of whom reached adulthood (dates according to the Julian calendar if before the year 1700):

After his wife Elisabeth died shortly before Easter 1694 after a 26-year marriage, Johann Ambrosius, who was the father of three underage children at the time, decided to remarry with 36-year-old Barbara Margaretha Bartholomaei, who herself was mother of two younger Daughters and recently became a widow. The marriage took place on November 27, 1694. However, after only three months of marriage, Johann Ambrosius died on February 20, two days before his 50th birthday. Ambrosius Bach enjoyed a good reputation in Eisenach even after his death. His widow applied for a year of grace, which the cantor Eisenachs, Andreas Dedekind, formulated, because as a woman she could not speak for herself at the time. She received forty thalers from Ambrosius Bach for six months. Nothing is known about their whereabouts.