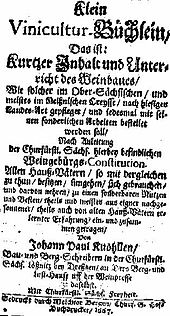 Knohll, who comes from a family of winemakers, was commissioned as early as 1645/1646 with the supervision of families working in the Gedinge . In 1655 Knohll became deputy vineyard manager in Wittenberg .

From 1661 he was a building and mountain clerk in the electoral vineyards of the Lößnitz , based in the Hoflößnitz . In addition to his work overseeing the Hoflößnitz and the maintenance of the same, he wrote in 1667 with his work small Vinicultur Booklet , a work commissioned by the Elector, a review of the originating from the April 23, 1588 Electoral Saxon Weingebürgsordnung . In the work, not only is the canon of the 24 fixed rules of mandatory vineyard work in the electoral mountains explained in detail, but these are supplemented with personal experience. This made it the standard work of Saxon wineries until the 19th century. The examination of contemporary grievances in viticulture makes the book an important source of its time about the life and work of winemakers.

Not only because of the malicious statements against the winemakers in his book, but also because of the ongoing dispute with his winemakers, Knohll was relegated to Schulpforta near Naumburg as a mountain administrator in 1672 . Around 1685 he lived in Dresden and after 1690 as a teacher in Leipzig . After 1702, probably around 1708, Knohll probably died in Kötzschenbroda .

In Radebeul, a street directly on the Hoflößnitz - the Knohllweg - was named after him. 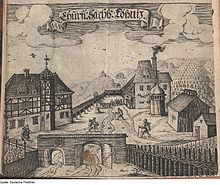 View of the vineyards in the Loessnitz with winery . Johann Paul Knohll: Small Vinicultur booklet . Frontispiece, 1667.