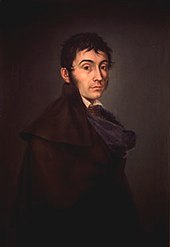 José Aparicio 1811: Socrates as a teacher

José Aparicio Inglada (born December 16, 1773 in Alicante , † March 10, 1838 in Madrid ) was a Spanish history and portrait painter . Alongside José de Madrazo y Agudo and Juan Antonio Ribera , he is considered one of the most famous Spanish painters of classicism .

Vicente Aparicio and Manuela Inglada had eight sons. The seventh was José. He studied at the Royal Academy of Fine Arts of San Carlos in Valencia . After winning a first prize in the painting class there in 1793, he went to the Madrid Academy of Fine Arts in San Fernando . In 1799 he received a grant from Charles IV , which enabled him to be the first Spanish painter to stay in Paris in the studio of Jacques-Louis David . A few years later the Spaniards Juan Antonio Ribera and José de Madrazo joined David as students. In 1805 Aparicio received a gold medal for his painting La epidemia de España . Before going to Rome in 1807 , he sent his works to the Salon de Paris twice.

In Rome in 1808 he refused the oath of allegiance to the new Spanish king Joseph Bonaparte and was incarcerated in Castel Sant'Angelo together with other young Spanish artists who were on scholarships in Rome . After his release, he was disembarked in Barcelona on May 21, 1815 . In August of the same year - the beginning of his career - Ferdinand VII appointed him his court painter . From then on, the fame of Spain became Aparicios permanent theme, which culminated in the painting Desembarco de Fernando VII en la isla de León and in 1829 earned him the title of Honored Academic of the Academy of San Carlos . He later became director of the San Fernando Academy . In addition to pictures of religious content, he painted the elites such as General Francisco Javier Castaños and Baronesa Mayneaud de Pancemont. One of his students was Francisco de Paula Van Halen (1814–1887).

In 1833 - after the death of Ferdinand VII - his star sank in the slowly developing liberal system of government . José Aparicio died impoverished.