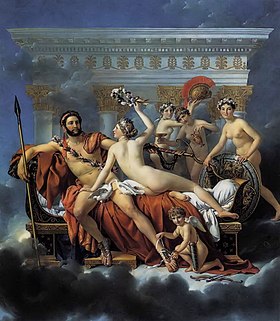 Classicism painting means an art style that is based on Greco-Roman antiquity and the Italian Renaissance .

Compared to other previous, simultaneous or subsequent art movements, such as baroque , rococo , romanticism or impressionism , the ideal of classicism consists in equality and harmony, also in a certain rational sobriety, objectivity and rigor.

As an epoch term in German, classicism is generally understood to mean painting between around 1750 or 1760 and around 1820.

However, the term "classicism" is not completely clear, since as early as the 16th century there were again and again classicist movements in painting that either existed or existed simultaneously as a countercurrent to other aesthetic ideals - especially the Baroque or Tenebrism were also temporarily in the foreground. Examples of this are the classicist baroque of the so-called Bolognese school in the 17th century - whose influence also reached Rome early on - with protagonists such as Guido Reni , Domenichino , Albani , Poussin or Carlo Maratta . Influenced by painters such as Poussin or the landscape painter Claude Lorrain , this classicist baroque reached France before 1650, where it was elevated to an ideal under Louis XIV (see → classicisme ), not least as a counter-image to the strongly moving, exuberant and emotional Baroque Italian or Flemish coinage ( Rubens ).

Therefore, the period from approx. 1760 to 1820, especially in France (and also in other countries), due to the classical art of the 17th century, is not referred to as classicisme , but as neo-classicisme .

Classicism of the 18th and 19th centuries emerged as an artistic form of expression in the Age of Enlightenment with its ideals of reason and rationality and thus automatically formed a counterpoint to the agitation, emotionality and sensuality of the late Baroque and Rococo that had prevailed before . At the beginning, these currents could not be clearly separated from one another, but also occurred in mixtures. In Italy in particular, there were individual artists who paid homage to a more classical ideal as early as 1750, such as Marco Benefial (teacher of Anton Raphael Meng) and Pompeo Batoni .

Pierre-Henri de Valenciennes : Capriccio from Ancient Rome with the End of the Marathon , 1788

In addition to the ideals of the Enlightenment, outstanding impulses for classical art and painting came from the ancient excavation sites in Herculaneum and Pompeii , and from the writings and engravings influenced by them, such as Piranesi's views of the ruins of ancient Rome and the works of Winckelmann . The latter entered the service of Cardinal Albani in Rome in 1755 and published his " Thoughts on the imitation of Greek works in painting and sculpture " that same year ; His " History of Ancient Art " followed in 1764 . In this he elevated the "noble simplicity and quiet greatness" of Greek art to an ideal.

One of the first (neo) classical paintings (in the true sense of the word ) is generally considered to be the ceiling painting The Parnassus , which Anton Raphael Mengs, a friend of Winckelmann, painted for the Villa Albani in Rome in 1760–61 .

The painters broke away from the allegorical program of the Baroque period and painted scenes from Greek and Roman antiquity . The decisive factor here, however, is not only the contextual reference to antiquity (which already existed before), but above all its stylistic implementation: Classicist works are characterized by a simple, sober and clear, occasionally strict formal language. The impasto coloring of the Baroque disappears in favor of a two-dimensional application of paint, the drawing is given preference over the painterly, the coloring tends to cool, the figures are depicted in calm poses and often in relief , with a certain preference for depictions in (Greek) profile - An important impetus comes from ancient sculptures or from around 1780 from the works of Antonio Canova that were perceived as ideal .

The aim was to use proportion and harmony to produce a "perfect" beauty idealizing nature; the works of art should be beautiful, noble and educating. Criteria and rules were used as a basis for their generation. In addition to antiquity, models in painting are in particular the works of Raphael (especially Madonnas ) and his later successors such as Guido Reni . An important role model in history painting is Nicolas Poussin, in landscape painting artists of the 17th century such as Albani and Claude Lorrain.

In France, Étienne La Font de Saint-Yenne was in 1747 with his harsh criticism of the painting of the Rococo in the book "Réflexions sur quelques causes de l'état présent de la peinture en France" (Considerations on some causes of the current state of painting in France) providing the impetus. In France, Joseph-Marie Vien is seen as a pioneer of classicism, whose most important pupil was Jacques-Louis David . The painting The Oath of the Horatians (1784, Louvre , Paris) by David is considered a kind of "founding manifesto" of French classicism, due to its "strict antique-like drawing, the clear, two-dimensional composition and cool colors". At the same time, this picture, like the entire work of David, also bears strong political-revolutionary traits, and already shows a tendency towards the tragic, pathetic and martial, which David and his students subsequently expressed even more clearly, and which in a certain contradiction to the actual clarified ideals of pure classicism.

The classical conception of art put the idea above reality. On the basis of an idea of ​​perfection given to him, the artist must correct the contingencies of imperfect reality through the style of his figures. The study of exemplary old works of art, the observance of design rules, took precedence over the study of nature. A strict classicist could in principle do without color. A clearly manageable and harmonious composition of the figures, a calm measure of time prevails in all gestures.

In portrait art, the classicist ideals of beauty were not always or only partially implemented, since the focus here is on a representation of the model that is as realistic and lifelike as possible.

For late classicism in the 19th century, it is sometimes not possible to make a completely clear distinction from romantic painting. Examples of this are the work of Anne-Louis Girodet-Trioson , but also many paintings by Jean-Auguste-Dominique Ingres , who in general is often considered a 'die-hard' classicist.

Rank dispute with the romantic school 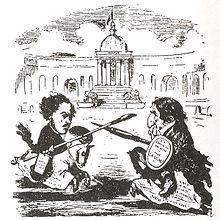 In the 1820s, the classicists came more and more into conflict with a new generation of artists, the romantic school. The new movement triggered a counter-movement to the imitation of antiquities of classicism. It gained ideological influence in all areas of cultural life in Europe. The "Romantics" saw the ancient classical period as something irretrievable and looked for new forms of artistic expression. In her, harmony and perfection are seen as lost ideals in which only sentimental longings emerge.

Romantic painting turned against the closed pictorial form of classicism and mostly dissolved the representational contour in favor of color. From this point of view, Eugène Delacroix was seen as Ingres' main opponent in France .

From the perspective of romanticism, classicism embodied an unchangeable order as an expression of conservative intentions to stabilize the social order. He was represented politically and practically by the academy and its subordinate art college, the Ecole des Beaux-Arts . Therefore, classicism (especially of the 19th century) is also considered 'academic'.

From an art-historical point of view, classicism and romanticism are seen less as irreconcilably conflicting art forms. Rather, they are two closely interlinked and mirroring attempts to respond to the aesthetic challenges of early modernism . In particular, there is an overlap in painting from the Biedermeier period and painting from the late Romantic period.

Painters who are assigned to Classicism, see → Category: Painters of Classicism