Pierre-Henri de Valenciennes on an engraving from 1788

Pierre-Henri de Valenciennes (born December 6, 1750 in Toulouse , † February 16, 1819 in Paris ) was a French painter and professor . He was one of the most important landscape painters of his time and had a great influence on later artists with his artistic and theoretical work. De Valenciennes is regarded as a forerunner of the mood painting of Romanticism and the open-air painting of Impressionism .

Pierre-Henri de Valenciennes was born on December 6, 1750 in Toulouse in Languedoc . His father Pierre Devalenciennes (1724–1754) was a wig maker , his mother Marguerite Abel the daughter of an upholsterer . As a teenager he began training as a musician and learned to play the violin . In 1770/1771 he studied painting at the Royal Academy of Toulouse ( Académie royale de Toulouse ). During this time he made extensive journeys through southern France and in 1769 also a first trip to Rome .

During this time, de Valenciennes was supported by the wealthy Dubourg family - in particular by the brothers Mathias (1746–1794) and Philippe Dubourg (1751–1822), who held important state and church offices. He also benefited from the fact that his aunt Anne de Valenciennes was married to the valet of the duke and statesman Étienne-François de Choiseul (1719–1785), who also supported him.

" Farm building of the Villa Farnese with two pyramid poplars "

On the recommendation of the Duke, Pierre-Henri de Valenciennes was able to continue studying in Paris from 1772 with Gabriel François Doyen , who was a member of the Royal Academy for Painting and Sculpture ( Académie royale de peinture et de sculpture ). There he came into contact with the French history and landscape painter Hubert Robert (1733–1808), who had a strong influence on him. In 1778 de Valenciennes had his first public exhibition of his paintings in Paris.

From 1777 to 1785 he stayed mainly in Rome thanks to the support of his patrons . In 1779 he also traveled for several months to the southern Italian kingdom of the two Sicilies , where he visited Naples , among other places , and to Umbria in central Italy. During his stay in Italy, de Valenciennes studied not only ancient art, but also the Italian landscapes. His outdoor sketches and oil studies served as a basis for later designing his paintings in the studio . In addition, he maintained a close relationship with the fellows of the Prix de Rome and lecturer at the French Academy in Rome ( French Academy in Rome ). 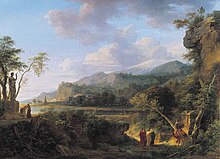 " Cicero discovers the tomb of Archimedes "

Pierre-Henri de Valenciennes returned to Paris in 1785 and was unanimously elected a member of the Royal Academy of Painting and Sculpture ( Académie royale de peinture et de sculpture ) in 1787 . The painting " Cicero discovers Archimedes ' tomb " , which he made for admission to the Academy, was his first work to be exhibited in the Salon de Paris ( Paris Salon ). Since then, de Valenciennes has regularly presented his paintings there, and in 1805 he was even awarded a gold medal.

He also taught painting - not only at the academy, but also at the Polytechnic ( École polytechnique ) and the Imperial School of Fine Arts ( École impériale des beaux-arts ) in Paris. His thematic focus was on perspective and landscapes. Some of his many pupils later became famous painters, such as ...

In 1815 de Valenciennes was awarded the Knight's Cross of the French Legion of Honor for his services as a painter and university teacher . He died on February 16, 1819 at the age of 68 in Paris, where he was buried in the Père Lachaise cemetery.

Pierre-Henri de Valenciennes was one of the most important landscape painters of his time. What was special about his work was that he was one of the first artists to do numerous sketches and oil studies outdoors in preparation for his paintings (which were later designed in the studio ). Thanks to the impressions he captured immediately, he achieved a previously unfamiliar sensitivity in depicting nature and landscapes.

The main theme of de Valenciennes' works are idealized, historical landscapes in which ancient buildings and monuments can be seen. A wide sky often rests over the action , showing a diverse play of clouds and light and taking up a considerable part of the painting. In contrast, people are usually only shown very small in the paintings and only appear sporadically - they lose themselves in an overwhelming setting, so to speak.

In his work, the gradual change in the understanding of nature is reflected in art, which was later expressed in the mood painting of Romanticism and the open-air painting of Impressionism , see for the German Romanticism z. BJG v. Dillis .

More important, however, is his role as a pioneer of open-air painting. He made many of his landscape studies in the wild. With these works a new conception of art can break out, which culminates in the school of Barbizon (especially in the works of Camille Corot and Gustave Courbet ). He is thus also the direct predecessor of Impressionist landscape painting (e.g. Monet , Degas , Pissarro in France, Leibl and his circle in Germany, Gignous in Italy).

For a long time, researchers saw V. only as a successor to Nicolas Poussin . It was not until Princess Louis de Croÿ donated the small-format oil studies to the Louvre in 1930 that the importance of V. was slowly recognized by science. Even so, it still does not have the status it deserves in art history. Viewed correctly, V. must be considered the “true discoverer of the immediate impression of nature recorded on the canvas” (S. Schultze). This reflects a fundamental change in the understanding of nature in his work, which continues into our century.

However, much of his work is still awaiting closer investigation.

His above-mentioned book became the standard work of landscape painting in 19th century France for a whole generation of painters. In it he demands that the landscape painter should become an observer of nature (not a matter of course in his time) and should record his observations on site in oil studies.

Gallery of other paintings