This article is about the extinct Kaskaskia Indian tribe. For more meanings, see Kaskaskia (disambiguation) . 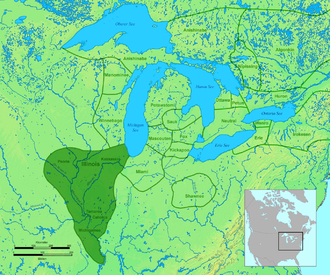 Illinois residential and hunting grounds before 1700

The Kaskaskia belonged to the Illinois , a confederation of around twelve small Algonquin- speaking Indian tribes , who at the beginning of the 17th century were scattered over an area that included northern Illinois and parts of Missouri and Iowa . The tribe is now considered extinct.

The Kaskaskia were one of the most important tribes of the Illinois Confederation in the 17th century and were one of the numerous Algonquin tribes that were attacked by the Iroquois during the Beaver Wars . They sought refuge in what is now the US states of Illinois and Wisconsin . Around 1650 there were refugees from numerous tribes living there in multitribal villages. Presumably, Indians with the same or similar language and culture formed the Illinois Confederation during this time. Many of them moved to what is now called Starved Rock . The living conditions there were difficult because the maize harvest often failed and the hunters fought against each other for game.

Around 1680 there was another wave of attacks by the Iroquois, in the course of which the large Kaskaskia village at Starved Rock was destroyed. That was the trigger for an alliance between the Algonquin tribes and the French. They set up a trading post at Starved Rock, where a large number of Illinois people still lived. Numerous Jesuit missionaries appeared with the French and succeeded in converting young women in particular from the Kaskaskia to Christianity . More Indian women married French Ranger and around 1711 many Kaskaskia were to Catholicism converted .

The Illinois Confederation tribes waged a long-running war against the Fox and their allies. With the support of the French, they almost managed to destroy the Fox in the 1730s. As a result of permanent wars, European diseases against which they had no defenses, and increasing alcoholism , the population of the Indians fell dramatically in the 18th century. The Kaskaskia moved from Starved Rock to the mouth of the Kaskaskia River in the Mississippi . Many Kaskaskia followed the movement of the Ottawa chief Pontiac who led the Pontiac uprising (1763-1766) named after him . It was an unsuccessful revolt against British rule in North America. Nevertheless, it is doubtful whether the uprising would have had a realistic chance of success without French support. In April 1769, Pontiac was murdered while drunk in Cahokia, Illinois by a member of the Kaskaskia who allegedly received money from a British dealer for this. Pontiac was buried near St. Louis , Missouri.

At the time of the American Revolutionary War (1776–1783), the Kaskaskia were mostly to be found on the Mississippi. One group, however, allied itself with the British and fought the Americans to prevent their advance west. By the end of the 18th century, the Illinois tribes were depopulated. In the Treaty of Vincennes in 1803, the Kaskaskia sold their remaining land in Illinois to the Americans and received two reservations in return .

In 1832 the remaining Kaskaskia left Illinois and Missouri to settle in Kansas . There they signed a contract in 1854 in which they founded the Confederated Peoria tribe together with the Peoria , Piankashaw and Wea . In 1867 they were assigned a new home in northeastern Indian Territory, now Ottawa County in Oklahoma . In 1899 153 Peoria moved there; the number of kaskaskia it contains is unknown. In 1978 the Peoria Tribe of Indians of Oklahoma received state recognition again and in 2000 had a total of 1,795 tribesmen.