The title of this article is ambiguous. For further meanings see Koppa (disambiguation) .

The Koppa or Qoppa ( Greek neuter Κόππα , Majuskel Ϙ / Ϟ, minuscule ϙ / ϟ) is a letter that was originally in the Greek alphabet was included and had the sound value / k /. It was abolished early and was used for the number 90 according to the Milesian system . The alternative glyph ϟ is used for the numeral today . The Latin Q comes from the Greek Koppa .

Origin and use as a letter 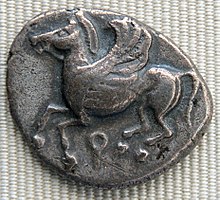 In the Phoenician language there were two k-sounds, the velare [ k ] and the uvulare (spoken in the throat) [ q ]. The two phonemes were represented with their own letter, the kaph and the qoph . When the Greeks adopted the Phoenician alphabet , they kept the two letters as kappa and koppa, even though the Greek language had only one phoneme / k /. In the alphabetical order, the Koppa was in the same place as the Qoph in the Phoenician alphabet, namely between Pi and Rho .

As in every language, the / k / before back vowels like o and u sounds in Greek sounded a little darker than before front vowels due to coarticulation effects . Because this slightly throaty allophone of the / k / sounded like the Phoenician / q / in front of those o and u sounds, koppa was written in this context, while kappa was used in front of the other vowels. Corinth , for example, wrote itself with Koppa as Ϙόρινθος Qorinthos . This is why Corinthian coins also bore a koppa as a mintmark of the city.

Because Kappa and Koppa only denoted positional variants, two letters for a phoneme soon turned out to be redundant. When in 403 BC When the Ionic alphabet of the city of Miletus was introduced in Athens , the koppas were dispensed with and it was replaced by the kappa. Due to the supremacy of Athens, the Milesian alphabet became the standard variant of the Greek script, which is why the Koppa is unknown in classical and modern Greek .

Use as a brand

In addition to the San and the Bucephalus symbol, the Qoppa was used as a brand for horses. A horse with a koppa branded on the thigh was called κοππατίας or κοππαφόρος. Such a horse is mentioned e.g. B. in the comedy The Clouds by Aristophanes .

Use as a numeral

Because the koppa could not be replaced in the system of Greek numerals , which assigned consecutive numerical values ​​to the letters of the alphabet, it was retained as the numeric symbol for 90. In Greece, like the Roman numerals in the West, the Greek numerals are still widely used for ordinals , so that the koppa is still used today in this way. Today, however, a special glyph ϟ, the so-called “numerical koppa”, is used for the number sign . This has evolved over time from the Ϙ to the uncial variant Ҁ.

When the Etruscans adopted the Greek alphabet, the koppa was still in use and was thus also adopted in the ancient Italian alphabet . According to Greek practice, the Etruscans used the Q for the k-sound before [ u ] (there was no o-sound in Etruscan ), K before [ a ] and the C, derived from the Greek gamma (Etruscan had no voiced consonants ) before [ e ] and [ i ].

Through the Etruscan mediation, the Q also entered the Latin alphabet . At first the Etruscan practice was followed and wrote e.g. B. pequnia for pecunia ("money"). Later one went over to writing the / k / only with C. However, the Q was retained in the combination QV (= QU) for the sound [ kʷ ], which was a separate phoneme in Latin. This made it possible to distinguish qui [ k „ iː ] (“who”) from cui [ 'kui ] (“who”).

Until today the grapheme QU has been preserved in most languages ​​written with the Latin alphabet for the sounds [kv] (German: source ), [kw] (English: question ) or [k] (French: qui , Spanish: que ) .

The Koppa as a number sign was adopted as Koppa (Ҁ, ҁ) in the early form of the Cyrillic alphabet and as ? in the Gothic alphabet . There it had no sound value, only the numerical value 90.

Presentation on the computer

In Unicode , both glyphs have been encoded in the Unicode block Greek and Coptic since version 3.2 :