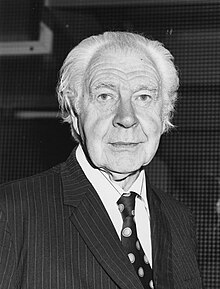 Lionel Charles Robbins, Baron Robbins (born November 22, 1898 in Sipson , Middlesex , † May 15, 1984 in London ) was a British economist and long-time head of the economics department of the London School of Economics .

He is well known for his definition of economics as a behavioral science that examines the relationship between goals and scarce resources with alternative uses:

"Economics is a science which studies human behavior as a relationship between ends and scarce means which have alternative uses."

"Economics is a science that studies human behavior as a relationship between goals and scarce resources with alternative uses."

Robbins took part in World War I in the British artillery and taught at the LSE from 1925 to 1961. He was a supporter of William Stanley Jevons and Philip Wicksteed (1844-1927) and was also under the influence of Léon Walras , Vilfredo Pareto , Eugen von Böhm-Bawerk , Friedrich Hayek , Friedrich von Wieser and Knut Wicksell . Robbins became head of the LSE's economic department in 1929 and soon brought Friedrich August von Hayek to his institute. John Richard Hicks , Nicholas Kaldor , Abba Lerner and Tibor Scitovsky came from this school.

Robbins took part in the debate on socialist economic accounting on the side of Hayek and Ludwig von Mises , and against Abba Lerner , Fred Taylor , and Oskar Lange .

Robbins originally appeared as a staunch opponent of John Maynard Keynes and the Cambridge School of Economics - he initially saw the LSE as a downright bulwark against Keynesianism. In the end he accepted - unlike Hayek - the "Keynesian Revolution".

In his later years, Robbins turned to the history of economic dogma. He made great contributions to the British university system and was ennobled on June 16, 1959 to Life Peer with the title Baron Robbins , of Clare Market in the City of Westminster, and thus also a member of the House of Lords . Since 1942 he was a member of the British Academy . In 1955 he was elected to the American Philosophical Society and in 1966 to the American Academy of Arts and Sciences .