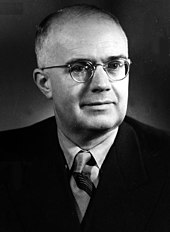 Oskar Lange was born as the son of the Protestant textile manufacturer Arthur Julius Lange and his wife Sophie Albertine. Rosner was born on July 27, 1904 in Tomaszów Mazowiecki. His ancestors immigrated to Poland from Germany at the beginning of the 19th century. From 1918 to 1922 he attended the Philological Gymnasium there. The experience of the misery and mass unemployment after the First World War prompted him to become politically active at an early stage. He joined the Polish socialist movement and in 1920 founded a division of the "Association of Polish Socialist Youth" (ZPMS). After graduating from school in 1922, he left his hometown and studied economics, economic history and mathematical statistics, first at the Adam Mickiewicz University in Poznan and from 1923 at the Jagiellonian University in Krakow , where he received his doctorate in 1928 and then taught statistics. In 1932 he married Dr. Irene Oderfeld.

In 1934, thanks to a scholarship, he went first to London and later to New York City. 1938–1945 Lange was a professor at the University of Chicago . In 1944 he broke off cooperation with the legitimate Polish government- in- exile in London and now supported the Lublin Committee , a communist counter-government in Poland set up by the Soviet Union. In 1945 he became the ambassador of the People's Republic of Poland in Washington. In 1947 Lange returned to Poland.

Oskar Lange, like Abba P. Lerner , developed a model of competitive socialism that differed from the purely planned economy . It was also known as the Third Way .