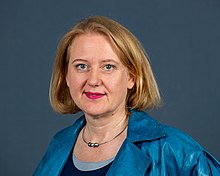 Lisa Paus is the daughter of the entrepreneur and machine manufacturer Hermann Paus . After a voluntary year of social work in the St. Elisabeth children's home in Hamburg, Lisa Paus went to Berlin to study in 1988. In 1999 she graduated from the Free University of Berlin with a degree in economics . From 1997 to 1999 she worked for the MEP Frieder Otto Wolf . In 2005 she was a lecturer in economics at the University of Applied Sciences for Economics (FHW) in Berlin . She has been the mother of a son since January 2009. 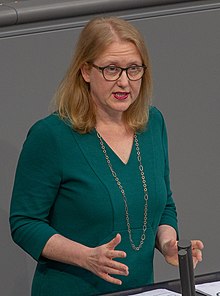 Lisa Paus, 2019 in the German Bundestag

Paus was elected to the Bundestag via third place on the Berlin state list of the Greens in 2009 and 2013 . In the legislative period from 2009 to 2013, she was a member of the Finance Committee and the Committee on European Union Affairs of the Bündnis 90 / Die Grünen parliamentary group.

In January 2017, Paus announced her application for the Berlin top candidate for the 2017 federal election after Renate Künast , who had been the top candidate since 2002, had renounced it. In the list of candidates for first place on the list, she prevailed in March with 798 to 308 votes against Bettina Jarasch and moved back into the Bundestag in September.

In the legislative period from 2017, Lisa Paus will be the financial policy spokeswoman for her group for the first time. She is a member and chairwoman of the finance committee. Her focus is on the fight against tax fraud, tax evasion, property speculation and money laundering, sustainable stabilization of the financial market, financing of affordable housing and more tax justice - especially for poor families and single parents. As the financial policy spokesperson, she is head of the Finances Working Group of the Bündnis 90 / Grünen parliamentary group. She is also a deputy member of the Budget Committee and also a deputy member of the Labor and Social Affairs Committee. She also heads the Berlin regional group of Bündnis 90 / Die Grünen.

Paus supports the reintroduction of the wealth tax . She considers the proposal of the German Institute for Economic Research to be a debatable model . Lisa Paus advocates a federal tax administration to curb tax evasion. Its aim is to make the different tax enforcement by the tax offices in the various federal states more effective. In order to stop tax fraud and tax avoidance, she also advocates an international transparency register and automatic data exchange. So that Germany cannot act as a tax haven itself, it is calling for banking secrecy to be lifted and for the bank balances of non-residents to be actively reported to third countries or for withholding tax to be levied if this is not possible - as is the case with civil war countries. She is the person in charge of the Green parliamentary group for the introduction of a financial transaction tax .

Paus advocates a gradual adjustment of the lower average tax rate of jointly assessed married couples due to the splitting of spouses with different incomes to individually assessed persons. Instead, children and their families should be promoted “regardless of the marriage certificate” through a basic child benefit.

Lisa Paus advocated better quality and more flexible childcare, which should make it easier for single parents in particular to take up work. She advocates an expansion of daycare opening hours, more company daycare and, above all, an expansion of the daycare system into the evening and night hours.

Paus advocates the reintroduction of non-profit housing in order to promote socially oriented property developers. Municipal housing associations, building cooperatives, but also private associations or individuals should be subsidized with tax breaks and investment subsidies if they build affordable rental apartments on a permanent basis.

Lisa Paus is in favor of an expansion of the not-for-profit concept in tax law: The aim is that organizations that campaign for human rights or peace, for example, also benefit from tax incentives. On the other hand, she also pleads for more transparency in the non-profit sector and for a nationwide, publicly accessible non-profit register.