This article is about the musician Louis Jordan. For the German farmer and politician, see Louis Jordan (Politiker) . 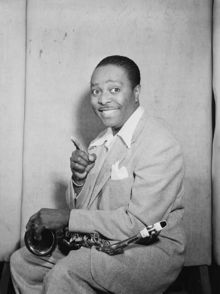 Louis Jordan (born July 8, 1908 in Brinkley , Arkansas , † February 4, 1975 in Los Angeles ) was an African-American jazz and rhythm and blues musician. He is also called the father of rhythm and blues and the grandfather of rock and roll. 54 of his songs came into the rhythm and blues charts , the majority of which reached the top position.

Jordan began playing the saxophone at the age of seven and made his first professional appearance with Ruby Williams eight years later. After changing engagements, including at Chick Webb , Jordan founded his band "The Tympany Five" in 1938. The end of World War II heralded the decline of the great big bands and swing . After the hardships and horrors of war, the public had an insatiable hunger for light entertainment. For Louis Jordan this was the start of his career. Even during his time at Chick Webb he had to step in as the announcer for the band leader who was not very suitable as a showman - Chick Webb was short and hindered by a hump. 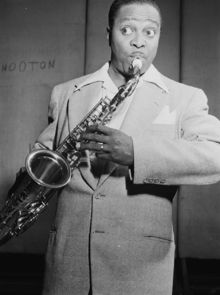 Louis Jordan's most successful period was between 1942 and 1950 at Decca Records with Milt Gabler as producer. In those eight years he reached number 1 on the R&B charts eighteen times . In total, his titles were able to stay on the throne of the R&B charts for 113 weeks. Hits like Caldonia (written in Van Morrison's interpretation Cal e donia ), Let the Good Times Roll (by Sam Theard ) or Choo Choo Ch'Boogie are now evergreens of traditional R&B and are among the standards in blues and rock music. His duet partners included Bing Crosby ("My Baby Said Yes"), Ella Fitzgerald ("Stone Cold Dead in the Market", Petootie Pie, "Baby, It's Cold Outside", "I'll Never Be Free") and Martha Davis ("Daddy-O"). In 1944 the artist had an appearance in the musical film Follow the Boys .

Inextricably linked to the song Caldonia is the name of Louis Jordan's third wife, Fleecie Moore, whom he married in 1942. In the song Jordan celebrates his love for a girl named Caldonia. The parents who are against this love try to put Caldonia in the worst possible light. Louis Jordan seems to have used the spoken middle part of the song extensively for his textual improvisations. In different humorous variations he tells the audience why, in the opinion of his parents, Caldonia is a bad girl. She is after his money, eat 24 donuts, 4 pounds of hamburgers a day and drink a case of beer alone. The song was inducted into the Blues Hall of Fame in 2009 .

Fleecie Moore was officially named as the composer of this song, which, according to Jordan, was incorrect: " Fleecie Moore's name is in front of it, but she had nothing to do with it. She was married to me at the time and we published it in her name . She had absolutely no idea about music. Her name was used on one song or another and she still receives money for it. "

According to the anecdote, Fleecie Moore is said to have related some of the text improvisations to her person and then rammed a knife into her husband's back. Despite this unpleasant incident, Jordan never lost love for the opposite sex. He married a total of five times. 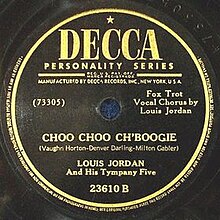 The music of Louis Jordan was used in a musical ( 5 Guys named Moe ; book: Clarke Peters) in 1990 . The musical ran from 1992 to 1993 on New York's Broadway and brought it to 445 performances. His music has been used in countless cover versions. ( BB King , Pinetop Perkins , Muddy Waters , Johnny Copeland , Wynton Marsalis , Diana Krall , Dr. John and many others) BB King recorded a tribute album ( Let the Good Times Roll: The Music of Louis Jordan ), as did Joe Jackson and Clarence "Gatemouth" Brown .

According to Nelson George, Jordan “took an important step in the evolution from blues to rhythm and blues by choosing the composition of his songs according to a marketing concept. With the support of his white producer Milt Gabler , Jordan's song material was brought into a form that contained urban elements, but at the same time made the blues roots visible. "

Numerous compilation albums of Louis Jordan's music are still being published today, which illuminate his work from different perspectives.