Life and beginnings in the theater

Bajpai grew up as the second of six children in a small village. His father was a farmer. His parents named him after Manoj Kumar , who is a well-known actor in India. Even as a child, Bajpai had to work hard with his father to save money for a later education. At the age of 17 he moved to New Delhi with the hope of entering the National School of Drama . Bajpai was rejected because of his shyness. In a later interview, he revealed that the rejection was a huge setback for him and that he had thoughts of suicide .

"I wanted to commit suicide after I was rejected by NSD."

Translated: I wanted to commit suicide after I was rejected by the National School of Drama. "

With the support of friends, Bajpai survived this phase. He then studied history at Ramjas College and learned the languages English and Hindi . Before he could only speak bhojpuri . Bajpai had his first roles in a street theater . After graduating, Bajpai joined Barry John's theater group, where he was not only an actor, but was also responsible for the set. 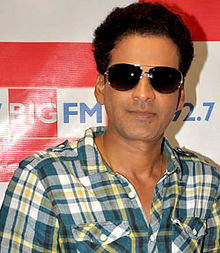 Manoj Bajpai in a radio studio in 2011

After ten years working in the theater, Bajpai turned to film. He had his first acting roles in the film Bandit Queen and in the television series Hum Bambai Nahin Jayenge and Swabhimaan . He later achieved great international fame through his roles in films such as Veer and Zaara - The Legend of a Love and Gangs of Wasseypur . In 2015, Bajpai took on a leading role in Traffic . He particularly often plays roles in which he encourages other protagonists with moral values.