As street theater forms of itinerant theater which have in the public space take place. 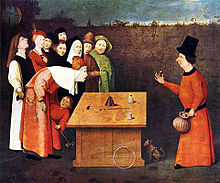 The juggler , painting by Hieronymus Bosch

Street theater, either as a multi -person theater group or as a one-person theater , already existed in its original form in the form of jugglers in antiquity in the 2nd century AD and was already mentioned by Alkiphron in his bogus letters.

All the medieval jugglers, traveling and street theaters relied less on carefully rehearsed productions than on the creative forces that come about through improvisation . Not least because artists performing in the open air have to get the necessary attention to this day, most appearances and forms of performance have always been very spectacular , e.g. B. by breathing fire , stilt walkers , figure-like large objects, giant masks, music, acrobatics and magic .

Modern German street theater has its historical origins in the workers' theater, which emerged at the time of the socialist laws in Germany (1879 to 1890), as well as in the communist agitprop theater of the Russian Revolution . Street theater was understood as culture from below. It had proletarian roots and at that time mostly pursued political goals, sometimes campaigning for certain parties of the left spectrum was openly carried out. Preferred venues were e.g. B. Factory gates after the plant closes to address the workforce directly. The leading representative of a workers' theater in Germany was Erwin Piscator , who founded the Proletarian Theater in Berlin in 1920/21, a theater only for workers, which, however, was rejected by the official cultural policy of the KPD. When he later, like many other artists, had to flee from Nazi rule, he founded the Dramatic Workshop at the New School for Social Research in New York after detours via the Soviet Union and Paris . There he also taught Judith Malina and Julian Beck , who founded The Living Theater in 1947 .

In the 1960s it was mainly theater groups such as the Living Theater, which moved from the USA to Europe and later to Brazil, and the Jord Cirkus (Earth Circus) from Sweden (founded by Chris Torch, a former member of the Living Theater) , the Odin Teatret from Denmark (founded in Oslo by Eugenio Barba , a student of Jerzy Grotowski ), the San Francisco Mime Troupe , who saw themselves as a "guerrilla theater", The New York Street Theater Caravan or the New Yorker founded by the German Peter Schumann Bread and Puppet Theater from the USA, which also appeared in Germany and the rest of Europe and made street theater popular as a form of (political) struggle, especially in the so-called " spontaneous scene". These groups only partially appeared in the streets; many of them proven long before new space and theater concepts which are heavily Erwin Piscator and the "epic theater" by Bertolt Brecht were affected. Many actors in these independent groups made the leap into the commercial theater and film business, such as Judith Malina from the Living Theater or Marika Lagercrantz from the Jord Cirkus.

The first happenings took place in the Federal Republic of Germany in the early 1960s . This is an art form propagated by Allan Kaprow , which arose from the connection between theater and the visual arts and which removed the traditional boundary between performers and audience. During the student riots and their protests against the Vietnam War in the mid-1960s, street theater was rediscovered as a suitable means of agitprop and, through influences from the happening, it was merged into a new type of teach-in and from Bazon Brock to agitpop (action lecture, agitation theater and street theater) reformulated.

At this time, the Polish director and theater theorist Jerzy Grotowski and his “poor theater” were (re) discovered. Other actors dealt with the " theater of the oppressed " according to Augusto Boal and practiced the "invisible theater" or the " forum theater" developed by him . At the same time, street theater artists increasingly resorted to the arsenal of figures and the game forms of the Italian commedia dell'arte , what led to the fact that juggling, circus and magic arts found their way into the development of theater history and more popularity with the audience, as became more and more noticeable in the pedestrian zones.

In the course of this, the fool , clown or "fool" became popular again as a provocative figure and role, shaped above all by Jango Edwards , whether solo or with the Friends Roadshow, as well as by Natias Neutert and Dario Fo with their unleashed form of comedic inclusion Human theater.

While the latter combine everything in one person, the Theaterhof Priessenthal bought a veritable circus tent and went on tour with it. To him belonged the actor Martin Lüttge , who had previously become known through theater, film and television roles , who had deliberately left the established cultural scene and now, together with his colleagues, sought the unity of living and working.

Street theater, be it as a theater group or as a one-person theater, is often invited by the municipalities to perform officially, for example during the earlier "Summertime" series of the city of Frankfurt am Main . It is now accepted as an art form in its own right. With its new spatial concepts, its wealth of improvisation and its greater involvement of the audience, street theater has often had a positive effect on the established stages. From short play scenes and animations to puppet and object theater, stilt theater, circus performances to performance and spectacular large-scale productions, many of his forms of expression can now also be found in city and state theaters.

In 2013, around 200 street theater groups or individual actors were active in Germany.

Since the 1980s, a number of festivals devoted exclusively to street theater have sprung up in numerous locations in Germany, most of which are open to everyone with free admission.

India has a tradition of popular entertainment theaters that go back to Vedic times and are performed in public places or in an open space on the edge of the village. The theater troupes, which move around part of the year, perform on the occasion of annual religious festivals such as Dashahara , Holi and Janmashtami or at the invitation of private art patrons at family and village celebrations. Theater forms in the tradition of North Indian Swang manage without a stage set-up, backdrops and with simple costumes. The audience sit in a circle on the floor. A further development is a curtain stretched between two posts as a stage background, as is common in Nautanki or in the regional styles Tamasha in the state of Maharashtra or Khyal in Rajasthan .

Popular forms of theater with a religious background that are held on the street at festivals include Ras lila in Uttar Pradesh and the dance theaters with masked performers Chhau and Gambhira in eastern India. In Kathmandu , the Mahakali pyakhan mask theater is part of the Indra Jatra procession after the rainy season in September . In the southern Indian states in Andhra Pradesh particularly Veethi natakam popular ( telugu : Vithi for "street" Nataka for "Theater"). Vithi ( Sanskrit ) refers to a one-act play shown on the street for one or two actors. In Karnataka , an outdoor performance is generally called Bayalata, which is usually understood to be the Yakshagana dance theater . In Tamil Nadu there is the street theater Terukkuttu ( Tamil : teru for "street", kuttu for "ritual theater") with 12 to 15 actors who appear in one place at night, and a simpler version with two people in a procession march for the goddess Mariamman .

In addition to these old folk traditions, a modern street theater developed in India in the 20th century, which is called Nukkad Natak ( Hindi : "street theater"). It goes back to the communist insurrectionary movement against British colonial rule in the 1930s, when street theater was used for political propaganda. From the Volkstheater the political theater took over the renouncement of costumes and stage design, instead the emphasis is on dialogues in an easily understandable language and here as there the ample use of dance and music. The pieces are mostly written collectively, their themes do not come from Indian mythology, but deal with everyday social problems.

There is often an exchange with the audience. For example, in Habib Tanvir's 1948 play Shantidut Kamgar (“One who works as an ambassador for peace”), the actors start a dispute with one another in order to attract viewers who then involve them in a discussion. Street theaters spring up in large numbers during election campaigns or for campaigns by non-governmental organizations as advertising ambassadors and soon disappear again.

One of the most famous names for street theater in India is Safdar Hashmi . He founded the Jana Natya Manch group in Delhi. While performing a play about a communist strike by industrial workers, he was fatally injured by a politically motivated thug attack in 1989. His birthday on April 12th is celebrated as National Street Theater Day. RP Prasanna founded the Samudaya group in Bangalore in 1975 . Members move around the country in smaller groups with political plays. The group Jana Sanskriti (“Folk Culture”), founded in 1985, performs each piece twice in a row: the second time, some viewers take on the roles of actors and develop a different outcome for the plot. In 1977 the group Koothu-P-Pattarai (KPP) was founded in Chennai , which developed from street theater to the leading modern theater group in Tamil Nadu. She plays village folk theater for an urban audience.