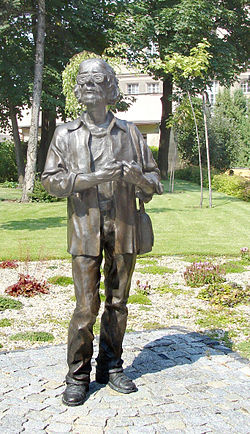 Statue of Jerzy Grotowski in Opole

Jerzy Marian Grotowski (born November 11 or August 11, 1933 in Rzeszów , Poland ; †  January 14, 1999 in Pontedera , Italy ) was a Polish director and theater director, methodologist, theorist and reformer. He is considered one of the leading representatives of the theater avant-garde, a co-founder of theater anthropology and, together with Henryk Tomaszewski and Tadeusz Kantor, one of the greatest artists of the Polish theater of the 20th century.

His family lived in Przemyśl until the beginning of World War II , and then they were separated. His mother moved with him to a small village and his father became an officer in the Polish army. After Poland surrendered in 1939, his father fled to England and became a soldier in a Polish division within the British army.

In 1955 Grotowski finished his acting studies in Kraków ( Cracow ) and then went to Moscow. There he learned the theatrical art of the Russian avant-garde, but also Stanislawski's acting training methods, Charles Dullin's "rhythmic exercises", Meyerhold's " bio-mechanical training " and Wachtangow's synthesis, which influenced him as much as Bertolt Brecht and Antonin Artaud . In 1956, after a trip to Central Asia and China, where he studied Peking Opera , Indian Kathakali and Japanese No-Theater , he returned to Poland to the drama school in Krakow to begin studying directing, which he directed in 1960 -Diploma Graduated.

While still a student, he and the literary critic Ludwik Flaszen (* 1930) took over Teatr 13 Rzędów, the theater of the 13 rows (with a total of 34 seats) in Opole (Opole), which was later renamed “Teatr Laboratorium 13 Rzędów”. Before that he had directed various stages and Polish radio. The theater of the 13 rows was an experimental theater and at the same time a theater laboratory for researching the arts of theater and acting. Between 1961 and 1968 Grotowski was mainly concerned with the training of actors , the body became the focus of his research through comparative theater anthropology . The connection between life and theater became more and more important, the role of the audience / actor was redefined and the venues were opened up. His concept of "poor theater" emerged.

The founding members included the actors Rena Mirecka, Antoni Jaholkowski and Zygmunt Molik, and later also Ryszard Cieślak (Award: best actor on Off-Broadway in the 1969/70 season in two categories; for the first time to an actor who does not play in English) , who was one of Grotowski's closest collaborators because he was the best at implementing his method, and Zbigniew Cynkutis. One of his students during his time in Opole was Eugenio Barba , who founded the Odin Teatret in Oslo on the basis of his work with Grotowski (see also: Street theater ).

On January 2, 1965, the theater moved to Wrocław ( Breslau ) and got the official status of an institute there. The full name was "Theater Laboratorium der 13 Riesen - Research Institute for Acting Method". From 1966 the thirteen rows in the title were deleted, from 1975 only "Institut Laboratorium". The above The actor base was expanded to include Elizabeth Albahaca, Andrzej Paluchiewicz and Stanisław Scierski. Irena Rycyk, Zbigniew Kosłowski, Teo Spychalski and Jacek Smisłowski joined them later, although it should be noted that there was a certain fluctuation among the actors in the laboratory. However, all those named in this article remained from their respective entry through the entire period of existence of the theater and in some cases also directed subsequent institutes.

The “after” shows that Grotowski never staged “off the sheet”, but instead used the templates through z. B. The actors “reinvented” free improvisations and associations; the different versions show that the productions were never completely finished, but part of a “living process”, according to Grotowski.

After that, Grotowski made long journeys, mainly with the actor who embodied his principles the most: Ryszard Cieślak, to test his theory and practice in lectures, seminars, tours and theater festivals around the world, such as the Theater of Nations in Paris in 1967 and 1975 in Warsaw or in the cultural competition that accompanied the 1972 Olympic Games in Munich.

In 1975 Grotowski took the most decisive step in his development: he consistently turned away from theater in the sense of a performance and only carried out so-called "special projects", i.e. paratheatrical experiments and self-awareness internships in which the participants encountered unexpected tasks and situations. These usually took place over several days in the wild and each had a motto, such as "Tree of people".

From 1976 to 1982 Grotowski worked with a multinational group of 36 selected people at the “Theater of Sources”, in which he was concerned with the origin of traditional techniques. His research trips took him again to India, Mexico and Haiti. In Haiti he went in search of traces of the Poles who had been employed as mercenaries by order of France from 1802 and noticed an image of St. Mary on numerous voodoo altars, which was incredibly similar to the icon of the Black Madonna of Częstochowa .

This was followed by the "objective drama" (Objective Drama, 1983 to 1986), a phase during which Grotowski studied theatrical elements such as dances, chants, incantations, rhythms and the use of space. The focus has been placed on extreme accuracy of artistic skills and the professional execution of every detail. The mediation took place through courses with largely elimination of the public.

He spent his last thirteen years at the Workcenter of Jerzy Grotowski and Thomas Richards with the phase of "Art as vehicle, in which, as in certain old traditions, the attention for art goes together with the approach of the interiority of the human being" in Pontedera, where he also died.

Grotowski wanted to achieve a return to the primordial foundation of the art of acting, cleansed of all excess of the theater apparatus (the “rich theater”). In his plea for a poor theater he designed a play that "can exist without make-up, without independent costumes and sets, without a separate performance area (stage), without lighting and sound effects, etc." (Grotowski, 1994 and earlier). In doing so, Grotowski tries to disinhibit the actor, to loosen his physique, to tear open his psyche and to take his mask off: the actor faces the audience almost naked - the audience becomes a witness. In doing so, Grotowski uses hard physical and psychological training because he demands that the actor “transcend himself”, as well as the precise analysis of the individual processes through special sciences. "At least in his role, the actor is creator, model and creation rolled into one," says Grotowski. The way of working and living of his ensemble corresponds to this claim, namely "voluntary renunciation of material goods, sect-like coexistence, collective invention, high ethos".

Grotowski's charisma quickly made him a new theater guru, who aroused disapproval and even disgust in the conventional theater audience, but which the young actors followed in the spirit of the youth movements of 1968 like Jünger. Through his writings he also created the theoretical basis for his work, which called for a “poor theater”, that is, a theater that was freed from all superfluous props and limited only to the actor and his art. His teaching still exerts a great influence on many actors, directors (especially: Peter Brook ) and independent theater groups . 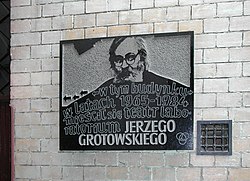 Memorial plaque for Grotowski in Breslau