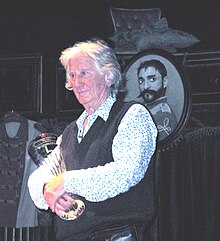 Augusto Boal (born March 16, 1931 in Rio de Janeiro , Brazil ; † May 2, 2009 ibid) was a Brazilian director , playwright and theater theorist. He was the developer of the theater forms “ Theater of the Oppressed ”, “ Forum Theater ” and “ Invisible Theater ” and, most recently, “ Legislative Theater ”. Boal, whose role models u. a. Bertolt Brecht and Konstantin Stanislawski were concerned with changing reality through theater, solving social problems and democratizing politics through theater. He is considered an important theater educator and was nominated for the Nobel Peace Prize.

Augusto Boal studied drama and chemistry at Columbia University in New York . Between 1950 and 1960 he developed a new theater idea at the Núcleo do Teatro de Arena in São Paulo that spread throughout Latin America: the “theater of the oppressed”. In 1971, during the military dictatorship , Boal was arrested and tortured. After his release, he was expelled from Brazil. He lived in exile in Buenos Aires from 1971 to 1976 . It was at this time that he wrote his famous book "Theater of the Oppressed" (1973) as well as "Torquemada" (1971), a book about his experience of torture by the military dictatorship. In 1976 he became visiting professor and leader of the theater group A Barraca in Lisbon . From 1978 he lived in Paris and mainly taught actors in almost all European countries.

In 1986 Boal returned to Brazil and was Vereador (City Councilor) of Rio de Janeiro from 1991 to 1996. During this time he tried out the possibilities of a direct kind of democracy ("Legislative Theater"). Under the influence of his long exile in Europe, he developed a number of new theater methods, so-called "prospective" and "introspective" techniques, which can be found in pedagogy, theater pedagogy, acting training, in the therapeutic field and since the late 1980s established in team development. These newer methods are summarized under the title “The Rainbow of Desire”.

Augusto Boal died on May 2, 2009 at the age of 78 in Rio de Janeiro of complications from leukemia .

What began with so-called Volkstheater-Fabriken in the mid-1980s developed into a political mandate for the labor party Partido dos Trabalhadores PT, for which he entered the Senate of his hometown. In cooperation with the citizens' initiatives in the districts, the Centro Teatro Oprimido developed many forum theater scenes, which were then worked out into a legislative proposal with the reactions of the public. Over 60 such initiatives were launched, 13 of which were immediately successful, others such as the discrimination against homosexuals sparked initiatives on federal legislation.

In cooperation with the democratization efforts of the PT in other cities, the basis for participatory political work in times of political disinterest with simultaneous time shortage due to neo-liberalization and globalization was created .

The concrete experiments that Boal carried out with German actors on the occasion of the “Theater der Welt” in Hamburg in 1979 did not succeed as a method, but in their essence. Boal, who had fled a brutal and inhuman military dictatorship in Brazil in the 1970s, was able to transfer the technology of the "invisible theater" one to one to Europe, but was unable to achieve the widespread educational purpose hoped for in theaters.

Augusto Boal's “Theater of the Oppressed” is based on two principles: The viewer as a passive being and object should become an activist in the action. The theater should not only deal with the past, but also with the future and its possibilities. In the discussions, in which he presented critical analyzes of the theater of Aristocrates, Machiavelli and Brecht and then completed them with discussions about his practice and experiments, Boal literally admitted that “the mechanisms of suppression in Germany are far too subtle to get through the 'invisible theater 'to be made visible. "

During his time in France he expanded his type of theater through cooperation with psychiatric institutions. A break from his former political focus, however, he discovered the concept of "Cop in the Head" and wrote about it in his book The Rainbow of Desires (first published in English in 1995).

In all European countries there are groups and initiatives that apply, convey and develop these methods, partly in regional movements, partly in national associations (e.g. the Forumteaterföreningen i Sverige, ARGE Forumtheater Österreich). Since the interfaces lie in theater education as well as in political education , in political theater and in intercultural communication, it is difficult there to think together the categories of this holistic awareness work, which relates to the fundamentals of Paulo Freire .

The UNESCO drew Augusto Boal in 1994 for his work with the Pablo Picasso Medal and the University of Nebraska awarded him in 1996 together with Paulo Freire, the honorary doctorate . The “Theater of the Oppressed” has been recognized by UNESCO as a Method of Social Change . The International Organization of the Theater of the Oppressed (ITO) was founded, of which he was President. In 2007 Boal received a Prince Claus Prize , combined with prize money of 25,000 euros. He was nominated for the Nobel Peace Prize through international initiatives .

(All: Publishing House of the Authors . Note: Only those pieces are listed that have been translated into German. For a more complete overview, see the Portuguese Wikipedia.)