The title of this article is ambiguous. Further meanings are listed under Margarete von Brabant (disambiguation) . 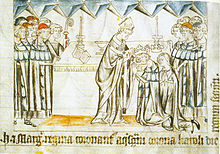 Fragments of two angels raising the queen to heaven

Margarete was a daughter of Duke John I of Brabant and his second wife Margaret of Flanders . She was married to the young Count Heinrich von Luxemburg in 1292 as part of the policy of mutual understanding with the House of Luxemburg (due to the hostility that resulted from the Battle of Worringen ). The marriage apparently went well. They had a son, Johann von Luxemburg (1296-1346), and two daughters: Maria (1304-1324), Queen of France since 1322, and Beatrix (1305-1319), Queen of Hungary since 1318. On Epiphany 1309 she was crowned in Aachen by the Archbishop of Cologne, Heinrich von Virneburg .

Margarete accompanied her husband on his Italian expedition , as the first queen since Constance of Aragón . She fell ill during the siege of Brescia , when an epidemic broke out in the army, and died only a few months later on December 14, 1311 in Genoa, where she was buried. The splendid tomb of Giovanni Pisano , built for them by order of Heinrich 1313-14, was destroyed in 1804 and is now only preserved in fragments with five elements (Genoa, Palazzo Bianco).

The queen was praised for her Christian way of life and her piety during her lifetime. Pisano's portrayal of the deceased is not interpreted as a portrait, "but as a soul raptured into heaven immediately after death". Italian chroniclers such as Albertino Mussato and Giovanni de Cermenate described the appearance of the Queen as “... although standing at the age of 36, of youthful appearance, with a white complexion, dark hair [...] and the face and eyes that smile constantly rails". To identify the queen, Pisano showed the veil covering the forehead, chin and neck according to Germanic custom, and a robe that enveloped the body according to Gallic custom.