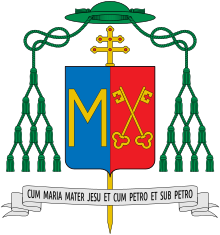 Pope John Paul II appointed him Archbishop of Sant'Angelo dei Lombardi-Conza-Nusco-Bisaccia on December 14, 1989 . The Pope personally donated him episcopal ordination on January 6 of the next year ; Co-consecrators were Giovanni Battista Re , substitute for the Vatican State Secretariat , and Miroslav Stefan Marusyn , Secretary of the Congregation for the Eastern Churches .

On February 28, 1998, he was appointed Archbishop ad personam and Bishop of Aversa, and on April 4 of the same year he was appointed to the office. After a priest was convicted of pedophile behavior there in 2008, there was controversy over Milano's attitude. He also aroused criticism through his suppression of pastoral initiatives that wanted to reform the treatment of homosexuals . He resigned from his office on January 15, 2011.