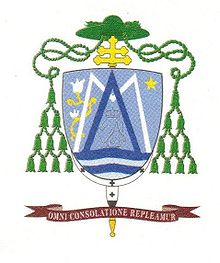 Coat of arms as the Archbishop of Cosenza-Bisignano

Salvatore Nunnari attended the archiepiscopal high school in Reggio Calabria and the regional seminary of Pius XI. in Reggio Calabria. He received on 12 July 1964, the sacrament of Holy Orders . Then Nunnari continued his studies at the Ignatianum Theological Faculty in Messina and obtained a licentiate in pastoral theology .

On May 15, 2015, Pope Francis accepted his age-related resignation.