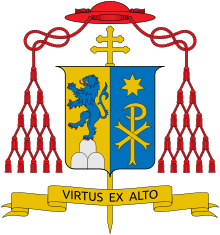 Giovanni Battista Cardinal Re (born January 30, 1934 in Borno , Province of Brescia , Italy ) is a retired Curia Cardinal of the Roman Catholic Church and cardinal dean of the College of Cardinals since 2020 .

Giovanni Battista Re was born into a family of artisans; his father was a carpenter. He grew up in Valcamonica . In 1945 he entered the Minor Seminary of the Diocese of Brescia . In 1957 he received the sacrament of ordination . He completed a doctoral degree at the Pontifical Gregorian University in Rome , at the end of which he was awarded a doctoral degree in canon law . He then worked from 1960 to 1961 as a lecturer at the seminary of Brescia . From 1962 to 1963 he studied at the Pontifical Diplomatic Academy and then entered the diplomatic service of the Vatican . On July 1, 1964, Pope Paul VI awarded him . the honorary title of Surplus Secret Chamberlain to His Holiness .

He worked in Panama and Iran before being called back to Rome to serve as personal secretary to the Cardinal Secretary of State . 1979 became Re Assessor in the Vatican State Secretariat ; in addition, Pope John Paul II awarded him the title of Honorary Prelate of His Holiness on January 18 of the same year .

On October 9, 1987, John Paul II appointed him titular archbishop of Forum Novum and secretary of the Congregation for Bishops. The episcopal ordination donated him John Paul II on 7 November of the same year. St. Peter's Basilica ; Co- consecrators were Archbishop Eduardo Martínez Somalo and Archbishop Bruno Foresti . On December 12, 1989, Re was appointed official of the State Secretariat.

On September 16, 2000, Giovanni Battista Re was appointed Prefect of the Congregation for Bishops and President of the Pontifical Commission for Latin America by John Paul II , and on February 21, 2001, he was admitted to the College of Cardinals as a cardinal priest with the titular Church of Santi XII Apostoli . On October 1, 2002 he was raised to Cardinal Bishop of Sabina-Poggio Mirteto .

Battista Re was valid until the election of Benedict XVI. in public as papabile . Benedict XVI. confirmed Re in all of his offices following his election in 2005. On June 30, 2010, Benedict XVI. a resignation request submitted by Re for reasons of age.

After the resignation of Benedict XVI. Cardinal Re was drawn on March 4, 2013 as assistant to Cardinal Camerlengos (as a representative of the Cardinal Bishops). He was a member of the special congregation for three days, which regulated subordinate issues during the vacancy. As the highest-ranking Cardinal Bishop with voting rights, Giovanni Battista Re presided over the 2013 conclave . Even before the conclave, Re was considered a close friend of the future Pope Francis, Jorge Mario Cardinal Bergoglio .

On June 10, 2017, after the resignation of Cardinal Roger Etchegaray from the post of Subdean of the College of Cardinals, Cardinal Re was appointed as the new Cardinal Subdean by the six Cardinal Bishops who hold a suburbicarian diocese. The election was confirmed by Pope Francis. In January 2020 he was elected Cardinal Dean to succeed Angelo Sodano . On January 18, Pope Francis confirmed the election and also awarded him the suburbicarian diocese of Ostia, which is connected to the Dean's office .