Meßhofen is part of the Roggenburg community and is located in the Swabian district of Neu-Ulm , Bavaria .

The district is just under two kilometers south of the historic center of Roggenburg in the valley of the beavers at an altitude of 522  m above sea level. NN . The area of ​​the district covers about 9.78 km².

The place was first mentioned in 1146 as "Moysaneshoven" and in 1248 as "Mounseshoven". In 1492 there were 43 fireplaces. The Frankenhofen single farm used to stand east of the village on the road from Roggenburg to Rennertshofen. Since the farmer on this farm was one of the ringleaders in the Peasants' War in 1525, he was executed after the collapse of the uprising. The field name Frankenhofer Feld am Osterbach reminded of this until the 19th century . The farm was razed to the ground and the fields were given in individual pieces to the residents of Meßhofen and Ingstetten. Around 1800 there were 63 families in the village; today the community part has around 300 inhabitants. The village belonged to the estates of the Roggenburg Monastery and remained under his rule until the secularization in 1803.

The Bavarian original cadastre shows “Messhofen” in the 1810s as a typical street village to the left of the beaver. 49 hearths are recorded, which have rather small farm areas, probably clods . The church with its small sacred field is located far away from the village, on the right the beaver in a hamlet with six hearths and more spacious farm areas. The electrification reached the place in 1900, was used as the water power of the beaver to generate electricity.

On July 1, 1972, Meßhofen was incorporated into the community of Roggenburg. The structure of the place has remained essentially rural. 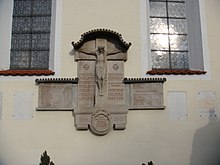 At the church of St. Cosmas and Damian, the choir and tower are still Gothic, the nave was stuccoed in 1748 by Christian Eitele von Weißenhorn and frescoed by Jakob Kuen . The high altar was made in 1751 by Dominikus Bergmüller from Türkheim.

Half a kilometer northwest of Meßhofen on the wooded Wannenberg is the much-visited pilgrimage chapel Maria Hilf (tub chapel). It owes its creation to a legendary event, which is recorded on the ceiling painting in (today's) choir: During the Swedish War, the Roggenburg abbot Franziskus Doser, disguised as a farmer, exercised pastoral care throughout the area, but was recognized by the Swedish mercenaries and was on a tree hung up, but with the help of the Blessed Mother Mary was wonderfully saved. The Roggenburg Abbey had a chapel built on this site towards the end of the 17th century, which has since been rebuilt and expanded several times.

Apart from the church, the chapel, the tower clock factory and the turbine house, only a few historical buildings have been preserved.

Districts of the community of Roggenburg