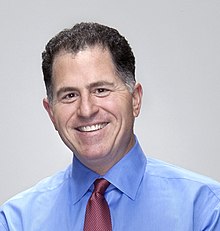 Michael Saul Dell (born February 23, 1965 in Houston , Texas ) is an American entrepreneur . He founded Dell Technologies , the world's third largest PC manufacturer , and continues to serve as its Chairman and CEO .

Michael Dell is the son of an orthodontist and grew up in a liberal-Jewish, middle-class family. After graduating from high school, he enrolled at the University of Texas at Austin in 1983 with a desire to become a doctor. Instead of concentrating on his studies, however, he devoted himself to trading in IBM PCs.

In 1984 he dropped out of college to start a company in Austin, Texas . With a colleague from his university he moved into some 300 m² office space and hired his first employees. A year later, Dell began manufacturing hardware .

In 1988 he converted his company into a stock corporation . He himself took over the post of CEO and chairman .

On July 16, 2004, Michael Dell moved from management to the supervisory board at the annual general meeting and took over as chairman. He handed over his previous position as CEO to Kevin Rollins. In 2006, the stock exchange supervisory authority and the public prosecutor's office started investigations into suspected balance sheet irregularities.

On January 31, 2007 Michael Dell took over the position as CEO again.

Michael Dell has been married to Susan Lynn Lieberman since 1989, a fashion designer who founded the Phi fashion brand . You have four children.

Michael Dell is a multi-billionaire. On the Forbes list in 2018 its assets of about 28.6 billion US dollars specified. He ranks 39th among the richest people in the world.