This article deals with the Minimetrò public transport system in Perugia. For other means of transport with a similar spelling, see: Minimetro (disambiguation) .

Minimetrò Perugia (also: MiniMetro Perugia ) is the name under which a line of local rail transport is operated in the Italian city ​​of Perugia . The specialty is that this happens with the technology of the cable cars . The name is derived from the Italian manufacturer's MiniMetro system.

The old town of Perugia, with its buildings mostly preserved from the Middle Ages and the early modern period , is located on a hill. The steep driveways into the old town and its narrow streets are unfavorable for traffic with a large number of private vehicles . The city has therefore been following a traffic concept since the early 1970s that drastically restricts individual traffic by car. Today, they are no longer allowed to enter the city during the day; there is a general entry ban for coaches .

To compensate for these traffic restrictions, there is a combined system of a rail connection, the Minimetrò, and a series of escalators and elevators that transport passengers to and from the Minimetrò stops , in addition to some local public transport bus lines . The line of the Minimetrò has a total length of 4 km. It connects the western suburbs of the city with the old town of Perugia and also connects the Perugia train station ( Foligno – Terontola line ). At the western terminus, in the valley, Pian di Massiano , there is a large car park with 3000 parking spaces to enable easy transfer from individual means of transport and coaches to the Minimetrò.

In April 1998, the city passed a sustainable mobility plan. In order to plan and manage the Minimetrò , she also founded the Minimetrò SpA .

In 2001 the project received the necessary building permit, which also included the possibility of expropriating the land required for the construction . In October 2002 the details and the design of the Minimetrò were approved. In the construction, however, a few changes were made afterwards in order to better adapt the project to the urban environment. Construction work began in 2003 and was completed in January 2008. The artistic direction for the execution of the Minimetrò was entrusted to Jean Nouvel . The French architect designed the stations along the line and made them light and transparent so that they blend in harmoniously with the surroundings. On January 29, 2008, the day of St. Costanzo of Perugia , one of the three patron saints of Perugia, the Minimetrò was inaugurated. More than 30,000 people used the train on the first day.

The entire project cost 98 million euros (excluding VAT ). In 2007 an investigation into the modalities of financing was carried out, which concerned the use of public funds from the city of Perugia. The city is said to have paid bills that Minimetrò SpA was actually obliged to pay .

The original project from 1998 envisaged a completely underground connection from Pincetto to the Monteluce district and the Perugia Sant'Anna train station of Ferrovia Centrale Umbra Srl (FCU), which was not implemented. A futuristic so-called energy roof, which was intended to make the terminus in the old town more visible and was designed by Wolf D. Prix from Coop Himmelb (l) au , was also not implemented. 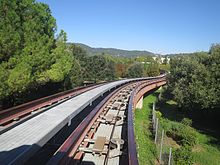 Section of the route with a centrally guided pull rope 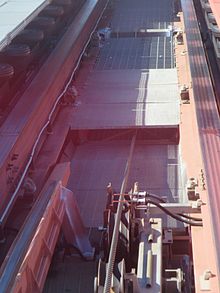 The Minimetro , built by Leitner AG , is a “ people mover ” with a double-track carriageway, one for each direction. The route has its own carriageway (so it is not a cable tram ). It runs partly elevated and in the section under the old town in a tunnel. The vehicles are guided along two metal rails. The drive is integrated into the road: the vehicles are pulled over the free stretch by an endless steel cable. As they approach a station, they disengage from the rope operation and are caught by rubber wheels attached to the side of the roadway, which rotate at the speed at which the vehicle is moving. These brake the vehicle and bring it to a stop. The exit from the stop is exactly the opposite: if the doors are closed, the rubber wheels mounted on the side of the road start moving and accelerate the vehicle to the speed of the pull rope, to which the vehicle is attached again with an automatic coupling.

Turntables are installed in the two end stations that turn the vehicles and transfer them to the lane in the opposite direction. The basement of the valley station also houses the workshop and a parking facility for vehicles that are not needed. 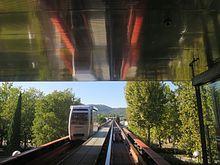 The stops are equipped with glass walls and doors at the platform edge, which only open when the vehicle comes to a stop and also opens its doors. There are seven stops, two of them underground, in the area of ​​the old town, five are built as elevated railway stations. They also have numbers - counted from the old town to the west:

Pincetto is the upper exit station of the Minimetrò. It is a tunnel station and is located under the old town of Perugia. It is accessible on the one hand from the eastern slope of the mountain on which the old town is located. From above it is connected to the old town by escalators and an inclined elevator . A special technical feature is the turntable with which the vehicles arriving from below are turned to return. The station also integrates the historic market hall . The motors for the cable drive of the Minimetrò and the drive for the turntable are housed here.

Cupa is also underground, on the western edge of the old town. The stop connects parking spaces, the university district in Via Pascoli and schools via escalators .

Case Bruciate is the first high-rise stop. It serves a residential area.

Fontivegge is 200 m from Perugia train station of the Ferrovie dello Stato Italiane (FS) and can be reached via a short walk. Fontivegge is located in a densely populated area with administrative and educational institutions as well as numerous companies. Immediately to the west of the Fontivegge stop , the Minimetrò runs over the Foligno – Terontola railway line.

Madonna Alta is located in one of the most densely populated districts of the city. There are numerous schools, offices and commercial space here.

Cortonese is located in the Chico Mendez Park and serves residents, the Mario SpAgnoli youth hostel , the new Borgonovo entertainment center and the UCI cinema. Here you can also change to the Umbria Mobilità bus lines .

Pian di Massiano is the western end point of the route and its deepest stop. It is located directly on the large parking lot with 3000 parking spaces and a small commercial area. This station also has a turntable for turning the vehicles.

Interior of a passenger cabin

The 25 cars are each about five meters long and can each accommodate up to 20 people. You ride on rubber wheels.

The vehicles can be used in varying numbers, depending on the required capacity. You move in a circular traffic on the opposite traffic lanes between the seven linear stops . The technically possible minimum train sequence of the vehicles is one minute, with regular timetable operation every two and a half minutes.

The system is operated fully automatically. Employees are not required for this. Operation and maintenance cost around 25,000 euros a day. The Minimetrò use around 10,000 passengers on a daily basis. The travel time for one route is around ten minutes.