This article explains the term sample fair in the context of the free market movement of goods; for other meanings see MusterMesse (theater) or Mustermesse Basel .

The double M as a symbol of the sample fair in Leipzig, created by Erich Gruner , here as an oversized entrance gate on the exhibition grounds (photo from 1983)

The concept of the sample fair was invented in Leipzig in 1895 ( Leipziger Messe ) and thus replaced the traditional goods fair with sample shows. The sample fairs are the usual type of trade fair today.

Since the beginning of European trade fair history in France in the 7th century, trade fairs have been held as a goods fair, which means that the trader took his "measured goods" with him to the respective trade fair location in order to present and sell them there. The champagne fairs held in the Middle Ages , which were then of European importance, also functioned according to this concept.

In the 12th century, when regional trade fair networks were formed in what is now Germany, in particular on the two important European trade routes Via Regia and Via Imperii , this concept was adopted. The history of the sample fair is closely linked to the history of the fair in the city of Leipzig, which was at the crossroads of these trade routes. As a result of its elevation to the status of an imperial trade fair city in 1497 (expanded in 1507), thanks to numerous privileges granted by Emperor Maximilian I, it became the prime trading center in Germany. An influential trading bourgeoisie now also developed .

At the beginning of the 19th century it occasionally happened that dealers only took samples of their products with them, because with the industrial revolution that began in the 18th century , new sales and distribution channels emerged. The goods could suddenly be produced in large numbers faster, with the same design and quality - the mail order business developed, the goods were transported faster and faster and the new profession of commercial agent emerged. In addition, the establishment of the German Empire in 1871 eliminated important trade tariffs for the cities. These factors plunged the trade fair cities across Europe into a deep crisis, but the important Leipzig Trade Fair in particular had to fear for its continued existence, because the new and revolutionary inventions such as the steam engines or the railways could not be sold in the largely medieval trading yards in downtown Leipzig become. The imperial trade fair privilege also lost its validity. However, it was possible to benefit from this development, as the completely new sample fair concept was developed in 1895. The merchants now had the opportunity to take a large number of products with them to the Leipzig trade fair, because they only took corresponding samples of each product with them, which were then exhibited in the newly built sample exhibition houses. The samples presented could now be viewed and tried out in detail by those interested and were then - as is common today - ordered and delivered. The sample fair with its wide range of consumer and capital goods spread worldwide in the 20th century and is still the usual type of fair today. As a result of the changeover of the goods fair to the world's first sample fair, Leipzig rose to become a world trading center until the Second World War and, after the Battle of the Nations near Leipzig , it became a wealthy city again.

"The sample fair enables the largest business with the least amount of resources, in the shortest possible time and in the smallest of spaces." 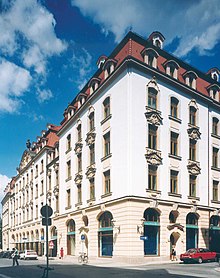 Southwest view of the municipal department store in Leipzig

With the changeover to the sample fair, Leipzig's city center underwent a profound redesign from 1894. Most of the baroque or renaissance trading and transit yards were ruthlessly demolished on a large scale. The municipal department store was opened in 1901 as the world's first model exhibition center in downtown Leipzig . It was followed by others such as Specks Hof , the Reichshof and the Mädlerpassage complex . These buildings with a particularly large exhibition area (e.g. 10,000 m² in Specks Hof) are the first models for today's modern exhibition halls. They also introduce the so-called “forced tour”, during which trade fair visitors have to follow a predetermined tour of the exhibition and cross the building on all levels. In addition, a completely new area was built on the south-eastern outskirts, the Technical Fair , which together with the city center formed the main exhibition center. Due to the enormous success of the Leipziger Messe, especially in the second half of the 1920s, the sample fair developed into a world fair concept in the 20th century. After 1945 and the elimination of Leipzig as a direct competitor, other German trade fair locations such as Hanover , Düsseldorf or Cologne were able to develop into increasingly important trading centers. Large exhibition grounds were created, such as the exhibition grounds in Hanover (496,000 m² covered area), the largest in the world. Large exhibition centers such as the Las Vegas Convention Center (LVCC) or the National Exhibition and Convention Center in Shanghai were also built in America and then increasingly in Asia .

Today the concept of the sample fair has established itself worldwide, but it is increasingly being held as a more specialized version in the form of the trade fair .

With the spring fair in March 1991, the history of the classic universal sample fairs also ended in Leipzig. Most of the trade fairs have been taking place at the new Leipzig Exhibition Center since 1996 .