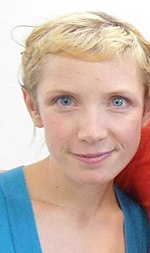 Naomi Fearn (born June 8, 1976 in Stuttgart ) is a German- American comic artist . Her autobiographical comic strip Zuckerfisch appeared in the Stuttgarter Zeitung from 2000–2014 .

From 1986 she attended the Karls-Gymnasium in Stuttgart , in between she was in the USA from June to December 1990, where she attended the San Francisco High School of Arts . In 1996 she graduated from high school. From 1998 to 2003 she studied graphic design at the State Academy of Fine Arts in Stuttgart .

As early as 1991 she contributed the illustrations for the children's book "The Little Yellow Bagger"; her first comics were later published in Moga Mobo magazine. The comics that were created as semester work during this time were accepted by Ehapa Verlag and published as part of the promotion of young talent. From December 2000, the stories of the heroine Nomi, her flatmates and the gay white rabbit appear every Thursday in the Stuttgarter Zeitung . In 2003 Fearn moved to Berlin . Her last comic with a completed story is Dirt Girl . Collected sugar fish strips from the Stuttgarter Zeitung appeared from 2002 to 2012 in six volumes by Zwerchfell Verlag . In July 2014, the Stuttgarter Zeitung ended sugar fish .

Fearn has been drawing comic strips for the Berliner Tagesspiegel from Monday to Friday since 2017, initially weekly . The series is called "R2G-WG" and caricatures the three Berlin state politicians Michael Müller ("Michi"), Klaus Lederer ("Klausi") and Ramona Pop ("Poppi") of the red-red-green Senate Müller .

In addition to her comics, Fearn also illustrates books in the Tiger Team series by Thomas Brezina .