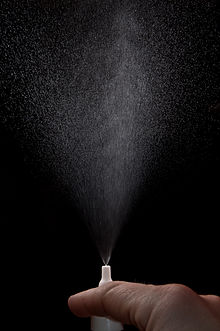 The actuation of the spray device generates a fine spray mist, the droplets of which are deposited on the nasal mucous membrane.

A nasal spray is a dosage form for liquid preparations for use in the nose. The liquid is applied to the nasal mucosa as a finely divided aerosol using a spray system . To do this, the opening of the spray bottle is inserted into the nostril and the dose is released by actuating the spray device.

A distinction is made between sprays with and without a dosing device for multiple or single use. Nasal sprays are used in local and systemic therapy as well as in nasal care. Nasal sprays with a medicinal effect belong to the class of drugs , those with a physiological or physical effect to the medical products .

Inflammation of the lining of the nose

In the local treatment, nasal sprays are used for the short-term treatment of swollen nasal mucous membrane ("blocked nose"), such as that caused by a cold. The preparations contain α 1 -sympathomimetics such as tramazoline , oxymetazoline or xylometazoline , which reduce blood flow to the mucous membranes and the formation of edema ("decongestion") by constricting blood vessels , so that you can breathe freely through the nose again. In addition, the mucous membrane of the ear trumpet swells , which results in pressure equalization in the middle ear and thus the benefit of decongestant nasal sprays for otitis media is justified. The effect sets in within a few minutes and lasts for up to twelve hours. α 1 sympathomimetics should be used a maximum of three times a day and not longer than seven days in order to avoid the development of drug rhinitis , which can lead to harmful long-term use ("dependence").

Nasal sprays are also used in the local treatment of allergic rhinitis (for example "hay fever"). They optionally contain

They are usually used over a long period of time.

After being applied to the nasal mucosa, the local anesthetic tetracaine reaches the rami alveolares ( superior anterior alveolar nerve and superior alveolar nerve medius ) which run underneath and which supply the teeth of the upper jaw with sensitive care. In a fixed combination with the vasoconstricting oxymetazoline , tetracaine can be used as a nasal spray for minor interventions in dentistry for local anesthesia in the upper jaw .

Certain medicinal substances are absorbed in relevant quantities through the nasal mucosa . The good blood circulation in the nasal mucous membrane means that it takes effect more quickly . Acid-sensitive substances that would decompose under the action of gastric acid can be made available systemically in a non-invasive manner by bypassing the passage of the gastrointestinal tract , since there is no need for injection or infusion .

The nasal route of administration is used for medicinal substances in a wide variety of fields of application, examples are:

Irritated and dry nasal mucous membranes can be cared for with aqueous preparations containing dexpanthenol (also known as pantothenol, D-panthenol or panthenol). It has a moisturizing effect due to its water-binding properties and also supports the treatment of healing and regeneration of nasal mucous membrane lesions .

Isotonic saline or sea salt solution (corresponds to the physiological concentration of 0.9%) has a moisturizing, cleansing and slightly rinsing effect and is used to support colds and to prevent the nasal mucous membrane from drying out. Hypertonic saline is supposed to remove excess water from a swollen nasal mucosa by osmotic means and improve the patency of the upper airways. Other care products are vegetable oils and plant extracts such as aloe vera extract.

The risks of using a nasal spray result from drug-specific side effects . They are comparable to the occurrence after using the liquids as nasal drops.