The Pendjari National Park (French: Parc national de la Pendjari ), also Boucle-de-la-Pendjari National Park, was founded in 1954 as a wildlife reserve (Réserve de Faune) , designated as a national park in 1961 and declared a UNESCO biosphere reserve in 1986 . It has been a UNESCO World Heritage Site as part of the W-Arly-Pendjari National Park complex since 2017 . It is located in the north of Benin , between the Atakora chain and the border with Burkina Faso . It is 275,500 hectares and part of the 880,000 hectare biosphere reserve. The national park is one of the last protected areas in West Africa to have populations of elephants, cheetahs, and endangered West African lions .

The Pendjari is located in the north of Benin. The next major city is Natitingou . The park is part of the WAP national park complex. Other large nature reserves in the immediate vicinity are the Arly National Park and the Réserve partial de Pama in Burkina Faso and the cross-border National Park W , which includes parts of Benin, Burkina Faso and Niger . In addition, hunting zones border the national park, which represent a buffer zone to the more intensively used agricultural areas in the area.

The national park is home to most of the typical large game species found in the West African savannahs. The symbol of the national park is the cheetah . However, the cat has become rare in the area. In the adjacent W National Park, around the year 2000 there were still an estimated two to three pairs. In the Pendjari National Park and the part of the W National Park in Benin, at least 5–13 cheetahs were believed to have been found in 2007, and the number is rising.

The population of West African lions in Pendjari and the adjacent national parks Arly and W comprises around 300 to 400 animals and is the largest in all of West Africa. It is noticeable that the males in the area almost without exception have no or only very weak manes. The West African lions of the Pendjari differ genetically significantly from those in South and East Africa.

The African wild dog , already considered extinct, is also still present in the park in small numbers. In addition, Pendjari National Park is home to other larger predators such as leopards , spotted hyenas , striped jackals, and African civets . 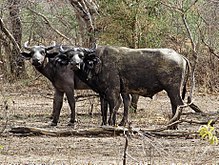 African buffalo in the national park

The Pendjari National Park is also home to a few hundred African elephants . The population in the park has been relatively stable over the last few decades and amounts to over 800 animals (as of 2005–2010). In total, over 3800 elephants live in Pendjari and the adjacent protected areas, i.e. the WAP national park complex. This means that the area is home to the largest elephant population in West Africa. Larger herbivores are also represented by West African grass buffalo ( Syncerus caffer brachyceros ), hippos , warthogs and numerous antelope species . Among the antelopes are roan antelope , West Africa hartebeest ( Alcelaphus major ), Korrigum- tsessebe ( Damaliscus lunatus korrigum ) Kobantilopen , Oribis and Duiker . Waterbuck, bushbuck , reedbuck and red flank duiker are rather rare . In addition to the green baboon , the tantalus green monkey and the hussar monkey occur as further primates. An inventory that was carried out in the spring of 2000 found that most species in the population were in decline. This seems to apply in particular to the leopard and the corrigum lyre antelope, both of which may still occur but could no longer be confirmed. Only the populations of West African hartebeest (approx. 1500 animals), roan antelope (approx. 2000 animals) and buffalo (approx. 2,700 animals) had increased at the time of the census in 2000. The most common larger species at the time of the census were the green baboon, the West African grass buffalo and the cob antelope (approx. 2600 animals).

The population of the Defassa waterbuck ( Kobus ellipsiprymnus defassa ) has fallen from around 3000 animals in the 1970s to only 120 animals in 2004.

The Pendjari , which is a tributary of the Volta , flows through the Pendjari National Park . There are also several large, shallow waters called mare, some of which dry up in dry periods. The fish fauna of the Pendjari National Park was first examined in 2004 and consists of a total of 41 species of fish from 34 genera and 17 families. The most diverse family are the mormyrids , 8 types (20%), followed by the tilapia with 5 types (12%), the tetras and Fiederbartwelsen each having 4 types (10%) and the stinger catfish , the carp fish and Geradsalmlern with 3 species each (7%). The pike are represented with two species (5%), the remaining families with one (2%). The most commonly caught fish is the African bonesfish (19%), followed by Nile pike (13%), tetras and cichlids (around 13%), tetras (11%), whiskered catfish (10%) and gill catfish (8%).

Most fish species are found both in the river and in the shallow waters. The population of the bone- winged fish , African pike tetra , giant perch and cichlid are restricted to standing water . Most of the pike, Nile pike, carp fish, straight tetra, spiny catfish and gill sack catfish also prefer the stagnant waters. In contrast, slender fish and electric catfish were only found in the river. The river is also the main habitat of tetras and whiskered catfish. The great nil pike and the glass catfish occur in both habitats. 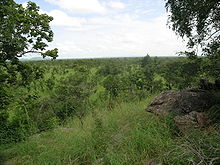 The Pendjari National Park includes numerous habitats from the Pendjari lowlands to the mountains of the Atakora chain , rivers, stagnant waters and island mountains. It is covered by forest savannah, swamp and grass areas. At an altitude of 100 to 500 m, the annual rainfall is about 1000 mm.

In 2008 there were around 6500 visitors, plus around 70 hunters who provide a large part of the park's income in the three adjacent hunting areas. The total income from tourism in 2008 and 2009 was around EUR 220,000. About a third of this was for photo safaris and two thirds for hunting tourism. Tourism covered about a third of the park's total financial needs. All other income, on the other hand, was negligible. Most of the visitors to the national parks were French and Benin. The proportion of other nationalities was comparably low.

As a result of Islamist violence in the countries bordering northern Benin, the Pendjarin National Park was initially classified as an unsafe area by the French Foreign Ministry in part and from May 10, 2019. Visits are not advised after several tourists were abducted and forcibly freed by troops from the Barkhane Opera . Due to the terrorism in the neighboring countries, the German Foreign Office urgently advises against traveling to the Beninoir national parks Pendjari and W in May 2019.

In 2012, the situation in the national park and the adjacent hunting reserves worsened after the withdrawal of German development aid. Poachers are said to have shot up to 20 elephants, among other things.

Various scientific studies are carried out in Pendjari National Park: