The north port in Berlin is a former inland port on the Berlin-Spandau shipping canal . It lies at the intersection of the districts of Mitte , Moabit and Wedding in the Mitte district , with the harbor basin completely belonging to Moabit. 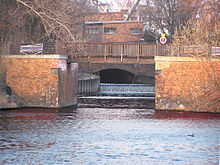 Panke estuary at the north port

The canal has been built since 1848 to relieve shipping traffic on the Spree . The construction of the north port began in 1856 and was put into operation on October 24, 1858. The north port is located between the Fenn Bridge in the northwest and the Kiel Bridge in the southeast. The main arm of the Panke flows into the south-eastern area of ​​the port. The Nordhafenbrücke runs across the harbor.

Initially, the north port served in particular to supply the municipal gasworks in Wedding and the industrial area around the Hamburg and Lehrter train stations . The harbor basin is 250 meters long and 130 meters wide with a total water surface of 35,000 m². Here 38 ships with a load capacity of 200 tons could be loaded and unloaded at the same time  , even if unloading the cargo was sometimes difficult because of the high bank reinforcement. In addition, the loading and unloading facilities on the bank were rather inadequate, so that the ships increasingly switched to the better equipped Humboldthafen further south.

Since 1886 the city of Berlin was responsible for the operation of the port. In 1923, the sponsorship was transferred to BEHALA , which was converted into a company owned by the city in 1937. The port was badly damaged in the Second World War . In addition - in addition to the mentioned difficulties with unloading - the location at the sector border contributed to the final decision to shut down the port in the post-war period . After operations on the east side had ceased in 1952, operations on the west bank were finally shut down in 1966. The former port facilities have been converted into green spaces.

Panoramic view of the north harbor