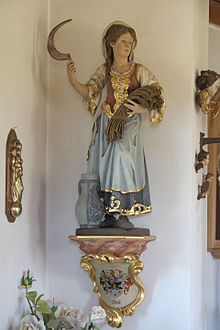 Notburga von Rattenberg (* around 1265 in Rattenberg ; † September 13, 1313 in Buch in Tirol ) is a Tyrolean folk saint . She is venerated as the patroness of the maids and agriculture. In connection with this, she is venerated in numerous federal states as the patroness of those who wear and sponsor traditional costumes. In Lower Austria, for example, the Dirndlg Wall Sunday is celebrated on the second Sunday in September (near their name day) .

According to legend, Notburga was born in Rattenberg around 1265 as the daughter of a hat maker . At that time Rattenberg belonged to Bavaria . She hired herself as a maid to Heinrich I von Rottenburg at Rottenburg Castle . The Lords of Rottenburg were the court masters of the Counts of Tyrol at that time. At that time she was already caring for the poor, the disabled and the sick. So, with the tolerance of her employer, she distributed the remains of the food from the castle to the needy.

When Heinrich I died and his son Heinrich II von Rottenburg became the new master of the castle, his wife Ottilia Notburga forbade them to continue distributing the leftovers to the people. Notburga obeyed and from then on regularly fasted for himself. The food that she did not eat herself on those days she continued to distribute to those in need. This behavior also displeased Ottilia, so that she angered her husband against Notburga.

One day, Notburga was carrying food for the poor in her apron and a jug of wine in her hand, her employer stopped her in the courtyard. He wanted to know from her what she was carrying. According to legend, Notburga is said to have answered: "Wood chips and lye". When Henry II, who did not believe her, looked, she only wore wood shavings in her apron, and there was lye in the jug.

However, your employer soon ended the employment relationship and Notburga had to leave the Rottenburg. Notburga found a job as a farmer's maid in the nearby community of Eben am Achensee . She looked after the cattle and helped with the field work. Notburga had asked the farmer for the right to stop working at the first bell in the evening to pray.

One afternoon, when the weather was threatening to change, the farmer demanded that no one stop working until all of the grain had been collected. At the first ring of the bell, Notburga stopped work, as always. The farmer, however, did not want to let her go. According to legend, Notburga threw her sickle into the sky, where it got caught on a ray of sunshine. The farmer was frightened and let Notburga go.

Back on the Rottenburg

According to legend, after Heinrich's wife Ottilia died, she found no rest in the grave. In addition, a bloody fratricidal war had broken out on the Rottenburg between Heinrich II. Von Rottenburg and his brother Siegfried. In the course of the dispute, the Rottenburg burned. In this situation, Henry II remembered his maid Notburga. He asked her to return to the castle. Heinrich donated an annual feeding for 500 poor people for his wife. Notburga quickly succeeded in establishing peace between the brothers Heinrich and Siegfried.

Notburga stayed at the Rottenburg until she died. Henry II and his second wife allowed her to look after and care for the poor and sick at the castle.

standing full-body relic in the parish and pilgrimage church of St. Notburga in Eben

Notburga is one of the most venerated saints in Eastern Styria , Tyrol and Slovenia . After her death she was buried in front of the altar of the Rupertikirche in Eben am Achensee . Due to a pilgrimage to her grave that began very soon, the church in Eben was expanded around 1434 and 1508. On August 22nd, 1718, her remains were exhumed with the permission of the Bishop of Bressanone, Kaspar Ignaz von Künigl . In 1735 the bishop of Brixen allowed her skeleton to be turned into a full-body relic for the church of Eben. This skeleton is not, as usual, lying in a side chapel, but standing in the reredos of the high altar of the church, for which a special privilege was required.

The veneration of the popular saint Notburga was in 1862 by Pope Pius IX. approved. The festive Notburga procession takes place in Eben am Achensee every September 13th . She is revered as the patroness of the maidservants, the rest of work and the evening.

In 2004 the Notburga Museum was opened in Eben am Achensee .