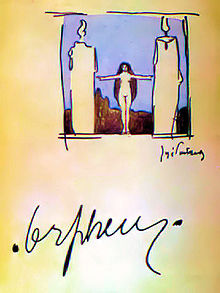 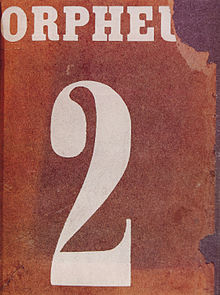 Title page of the second edition

Orpheu was a Portuguese literary magazine . She only made two issues. Orpheu 1 appeared for January, February, March 1915 and Orpheu 2 for April, May, June 1915. A third edition was planned, but never came about. The magazine should appear every three months.

Name of the magazine

Orpheu was named after Orpheus , the mythical singer and lyre player from Greek mythology. It is assumed that on the one hand Orpheus' journey into the underworld had something subversive (that the magazine was originally only supposed to appear for a certain number of people and was aimed at the renewal of literature) and that the singer with his lyre represented the authors of the poems and Journal texts should be available.

The editor for the first version was António Ferro , to whom two sub- editors (directors) were subordinate: Luís de Montalvor for Portugal and Ronaldo de Carvalho for Brazil . The magazine was headquartered in Lisbon , with a branch in Rio de Janeiro . The sole editors of the second edition were Fernando Pessoa and Mário de Sá-Carneiro .

The magazine caused the biggest literary scandal in the history of Portugal. The politician, writer and psychiatrist Júlio Dantas described the authors as "insane". The magazine was the talk of the day in Lisbon for weeks, and many other artists made fun of it. One was not used to the innovation and the sometimes violent poems in this form in what was then very conservative Portugal. Even illiterate people and people from the lower classes discussed the magazine as they were often informed of the facts by their employers and warned not to buy Orpheu.

For lack of money, because the main financier, the father of Mario de Sá Carneiro, stopped his payments and probably also out of fear after the scandal of the second edition, the third edition of Orpheu, which was already in trial printing for 1917, was never published. The following authors should have published articles there: Augusto Ferreira Gomes , de Figueiredo, António Botto , Alvaro de Meneses , Fernando Pessoa, Mario de Sa-Carneiro and Jose de Almada-Negreiros and Fernando Pessoa under the heteronym C. Pacheco . A facsimile of the proof was published in 1983.