In 1129 Gottfried I the Bearded , Count of Leuven and Duke of Lower Lorraine , turned to the abbot of the Premonstratensian Abbey of St. Martin in Laon , France , with the request to found an abbey near Leuven. For this purpose the count donated a park and a hunting lodge; his Meier Tyetdelinus gave the order a water mill and some adjacent fields.

The first canons soon moved into the palace, and within a few years the foundation developed into an abbey. Twelve years after it was founded, the park abbey was declared an independent house from the mother abbey, and the canons could elect their first abbot - Sirnon de Saint-Maurice. The abbey was nicknamed " Conventus Sanctae Mariae de Parco ", but is popularly only called Park Abbey to this day. 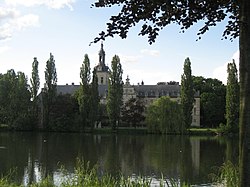 Under Abbot Willem van Luurbeek (1289–1306) the first abbey church was built in the Romanesque style. His successor had ponds dug in the south of the abbey for fish farming. Fish was an important food for the Premonstratensians, who were not allowed to eat meat for two thirds of the year.

William I of Orange-Nassau made the abbey his headquarters in 1572 during the siege of Lion. The situation in the monastery eventually became so dangerous that the canons had to seek refuge in Leuven.

In the 17th century the abbots Jan Druys ( Drusius ) and Jan Maes ( Masius ) shaped the monastic life in the abbey. The canons devoted themselves increasingly to science and studied theology at the University of Leuven . Abbot Drusius, as a visitor to the University of Löwen, manifested the pioneering social role of the abbots of the Park Abbey.

From 1719 to 1730, Prelate Hieronymus de Waerseggere had the gates, the church and the prelature renovated in the classical style. At that time 48 canons lived in the abbey - a number that has not been reached since then.

In 1786, as part of his policy of abolishing all contemplative orders , Emperor Joseph II issued a decree according to which all theology students had to complete their studies at a new general seminary in Leuven. The canons from the park abbey refused because they refused the courses offered by the new seminary, and in 1789 the abbey was dissolved after repeated threats from the emperor. The Premonstratensians had to leave the abbey and 660 soldiers were stationed in the buildings. The monastery was looted and the properties sold. Due to the Brabant Revolution , however, the Austrian regime was temporarily driven out, and in 1790 the Park Abbey was able to rebuild.

In 1794 the Austrian army was finally defeated by the French revolutionary troops and the southern Netherlands fell to France. The new regime banned all public beliefs, and the canons found life increasingly difficult. War stresses also forced the abbey to sell some properties. In 1797, the canons were eventually driven from the monastery by French troops and the park abbey became state property. Through an intermediary, the Premonstratensians managed to buy back part of the abbey, but they were no longer allowed to live in the buildings as a community. In 1828 the canons sold all the art treasures and books of the abbey, since they now considered a restoration of monastic life to be impossible.

In 1836 the abbey was finally reopened, but the parts of the monastery nationalized in 1797 had already been sold and could not be bought back by the canons due to a lack of money. Abbot Franciscus Versteylen revitalized the monastery, and at the end of the 19th century the canons even managed to found a mission in Brazil .

Today a small number of Premonstratensians still live in the monastery and continue the monastic tradition there. In 2003, large parts of the abbey were given a long lease to the city of Leuven because the convent lacked the financial means for the renovation work that was required, among other things, on the water mills.

The Norbertustor is located next to the cemetery wall. The building originally dates from the 17th century, but was rebuilt in the 1820s and adapted to the classicist style with a monumental gate framing. The continuous window frames give the gate a half-timbered look. On the side facing the fields, in a niche above the archway, there is a statue of the founder of the order, Norbert von Xanten , carved from white stone , which is intended to remind the visitor that he is entering a Norbertine or Premonstratensian monastery. The roof was originally adorned by four gold-plated decorative vases that have now disappeared.

In 1131 a simple Romanesque chapel was built on the site of today's abbey church. In the 13th century the church was converted into a simple Romanesque church. The next major change followed in 1628: Abbot Drusius had a crypt built under the choir in which the abbots were buried. At the end of the 18th century, during the time of Emperor Josef II, this burial chamber was closed again. During the renovation of the monastery, Abbot de Waerseggere also had the church renewed in the classical style. The Romanesque columns were removed, the aisles were raised and skylights were installed. The northern cross arm was broken off, the southern one converted into a sacristy. The furniture inside has also been fundamentally changed. The Brussels sculptor Jacques Bergé created a baroque altar with a portico made of limewood. Above it hangs the painting “The Birth of Jesus” by Erasmus Quellinus I from the 17th century. The large organ from 1853 was badly damaged in a fire in 1985 and is no longer playable.

House of the commissioner

House of the commissioner

The provisional was (and is) a canon of the abbey who was responsible for secular affairs. He inspected the land, forests and pastures and received craftsmen, architects and tenants in his office. The brick and sandstone style house with stepped gables on the north and south sides was built in the 17th century. At the beginning of the 18th century, like many other buildings in the monastery, it was rebuilt in the classical style. Right in front of the house is a water basin that was currently being built by Abbot Libert de Pape and where the cattle were watered. In the 1980s the building was thoroughly renovated and now houses seminar rooms.

Next to the church is the cemetery, where celebrities from Löwen find their final resting place. The names on the gravestones recall the history of the city and the Catholic University of Leuven. Funerals are held in the cemetery to this day. Many historical tombstones and monuments are well preserved and attract visitors.

The abbey is located in the south-east of Leuven outside the ring road, south of the Philips factory near the train route to Liège and Germany . It can be reached by car via the A3 motorway, exit 23 (Haasrode).