Original coat of arms of those of Percy 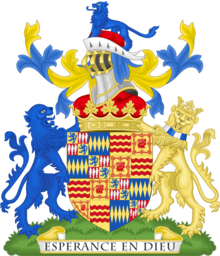 Coat of arms of the current head of the family, Ralph Percy, 12th Duke of Northumberland

Percy (originally also Perci) was the most powerful family in northern England for much of the Middle Ages.

The family goes back to the Norman nobleman William de Percy from Percy-en-Auge in Normandy . This had taken part in the Norman conquest of England .

The Percy are said to be descended from a Danish robber baron named Mainfred who settled in the Pays de Caux northwest of Rouen in the 9th century . After his relocation to England, his descendant William de Percy was enfeoffed with the feudal barony of Topcliffe in North Yorkshire as part of the Harrying of the North in 1172 . At the time of King Henry I , the family was represented by his great-granddaughter Agnes de Percy, the heir to William de Percy and Adelaide de Clare , whose wealth brought the king's second wife, Adelheid von Leuven , to her with her illegitimate half-brother Joscelin , called frater reginae (brother of the queen), to marry (see also: Stammliste der Reginare ). The third Henry Percy acquired Alnwick Castle in 1309 , which became the family seat, and the fourth Henry Percy rebuilt it as it is known today. The two Henrys are better known as Henry Percy, 1st and 2nd Baron Percy of Alnwick.

In 1377 the next Henry Percy was named Earl of Northumberland by King Richard II after his coronation . His son was the famous Henry Hotspur , who was killed in the Battle of Shrewsbury while his father was alive . Since father and son had revolted against King Henry IV , the title was declared lapsed in 1405. King Heinrich V revoked this withdrawal in 1416.

The male line of the descendants of Joscelin de Louvain went extinct in 1670 with Josceline de Percy, 11th Earl of Northumberland. His daughter Elizabeth married Charles Seymour, 6th Duke of Somerset , in 1682 , and their granddaughter married a Yorkshire knight , Hugh Smithson , who became the first Duke of Northumberland in 1766 .