Peter Dettweiler (born February 20, 1856 in Wintersheim , † June 17, 1907 in Leipzig ) was a German classical philologist . From 1883–1890 he taught as a lecturer at the Hessian Ludwig University. He dealt with subject didactics and edited Marcus Tullius Cicero .

Dettweiler was a nephew of the pulmonologist Peter Dettweiler . From the winter semester of 1872/73 he studied medicine at the Kaiser-Wilhelms-Universität Strasbourg and the Hessian Ludwigs-Universität . He became a member of the Corps Rhenania Strasbourg (1873) and the Corps Teutonia Gießen (1874). At Rhenania Strasbourg he clipped the first batch once, at Teutonia Giessen four times. In 1878 he was charged with a dissertation on Aeschylus pouring in for Dr. phil. PhD. In 1879 he came to the Landgraf-Ludwigs-Gymnasium in Giessen as a high school teacher and wrote several school programs there . He was an avowed follower of the headmaster Hermann Schiller , who devoted himself to didactic problems. In 1883 Dettweiler became head of the proseminar for classical philology at the University of Giessen, in 1887 an associate professor. In 1890 he switched to the old electoral high school in Bensheim as director . After a year at the renowned Ludwig-Georgs-Gymnasium in Darmstadt, he was appointed to the Darmstadt Ministry of the Interior in 1898 as a high school councilor and lecturer. After his early retirement in 1899, Dettweiler was the publishing manager at G. Freytag-Verlag in Leipzig , which among other things published classical literature, including the dictionary by Joseph Maria Stowasser . As an honorary member of the Corps Teutonia Gießen, he died at the age of 51 in Leipzig. He was buried in the old cemetery (Giessen) . 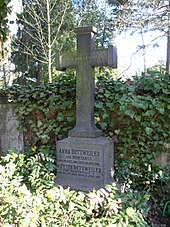