Wintersheim is a municipality in the Mainz-Bingen district in Rhineland-Palatinate . It belongs to the Rhein-Selz community , which has its administrative headquarters in the city of Oppenheim .

Wintersheim was first mentioned in 766 in the Lorsch Codex . On June 17, 766 a Hairdin gave the Lorsch monastery a vineyard with a yield of 4 ohms (160 liters) of wine. Numerous other donations to the monastery followed over the next few years, including vineyards. Viticulture must therefore have played an important role in the Wintersheim area in the 8th century.

Landgrave Hesso von Leiningen-Dagsburg died in 1467 . His property fell to his sister Margarethe von Leiningen-Westerburg . Her brothers von Leiningen-Hartenburg raised violent resistance to this. Margarethe had to call the Elector Friedrich I of the Palatinate for help. She promised the Palatinate half of the disputed 19 villages for his successful support in a partition agreement from 1471. After Margaret's death, her son Reinhard I von Leiningen sold some of the villages in question to Elector Philip the Upright in 1481 . Wintersheim, which had thus become Palatinate, was among the villages sold. In 1589, Wintersheim received court and village regulations ( Weistum ). It is located in the Hessian State Archives in Darmstadt in the “Weistümer” collection under number 118. During the coalition wars, the French revolutionary troops made their first incursion. The end of the Electoral Palatinate rule comes after 1796. Wintersheim is assigned to the canton of Oppenheim .

Wintersheim, Eimsheim and Dolgesheim are combined as the lowest French administrative unit in 1801 and receive a common Mairie (mayor's office). With the passing of the German Federal Act , Wintersheim comes to the Grand Duchy of Hesse with the 3rd Province, later referred to as the Province of Rheinhessen . Samuel Dettweiler becomes the first mayor of Wintersheim in 1836. The savings and loan fund Dorn-Dürkheim-Wintersheim was founded in 1872. The consumer association was founded in 1873, and in 1875 the choral society "Unity" was founded. 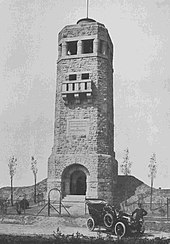 From 1972 to 2014 Wintersheim belonged to the Guntersblum community and since July 1, 2014 to the Rhein-Selz community .

The municipal council in Wintersheim consists of six council members who were elected by a majority vote in the local elections on May 26, 2019 , and the honorary local mayor as chairman.

Residential tower in the Dätwyl winery 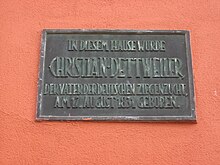 Badge on the house

A former late medieval residential tower made of quarry stone masonry dates from the 15th century; in the 18th century it was rebuilt and given a mansard roof. The associated cellar dates from 1754. The ensemble is located in the Dätwyl winery and is still used today for the local bar.

The former castle estate of the Barons von Frayss is a four-sided courtyard . The core of the manor house under the mansard hipped roof dates from 1618 (portal); in the first half of the 18th century it was remodeled in a baroque style. A walled garden follows.

A courtyard, which includes a small house with shield gables around 1600 including ancillary buildings, is located at Seilenbachgasse 2. The town hall is located in a former school from 1829. It is a late classical plastered building with ridge turrets. Rheinhessische Weingewölbe , d. H. A cattle shed arched over columns from the mid-19th century can be found at Eimsheimer Straße 11.

The Evangelical Church was built from 1896 to 1897 by August Ermel, Worms. It is a neo-Gothic hall building made of house stones with a three-sided end and hipped roof with ridge turrets.

Persons in connection with Wintersheim

Cities and municipalities in the Mainz-Bingen district