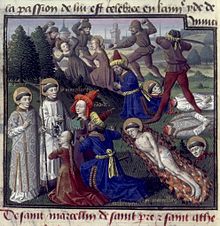 Martyrdom of St. Marcellinus and Petrus, French illumination around 1450 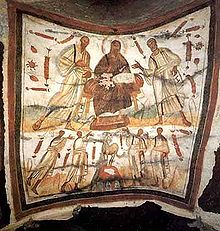 Fresco in the catacomb of hll. Marcellinus and Peter on the Via Labicana . Christ between the apostles Peter and Paul . Among them the venerated martyrs Marcellinus, Petrus, Gorgoninus and Tiburtius, who cheer the lamb. 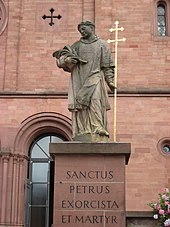 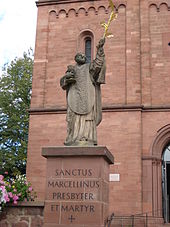 Baroque figure of St. Marcellinus in front of the portal of the Basilica of St. Peter and Marcellinus , Seligenstadt

Petrus , sometimes also called Petrus Martyr , and Marcellinus († 299 or 304 in Rome) were early Christian martyrs who suffered martyrdom in the persecution of Christians under Emperor Diocletian . They are venerated as saints in the Roman Catholic Church . They belong to the early Christian canon saints who are mentioned in the Canon Missae , the first prayer of Holy Mass in the Roman rite .

Peter and Marcellinus were thrown into dungeon around the year 299 or 304 during the persecutions of the Roman emperor Diocletian because they did not want to renounce their faith. According to tradition, the exorcist Peter and the priest Marcellinus converted fellow prisoners to the Christian faith and secretly baptized them. When the prison guards found this out, Petrus and Marcellinus were tortured and then beheaded in the Black Forest (Sylva nigra) near Rome. According to tradition, two pious women, Lucillia and Firmina, were entrusted in a dream with the recovery of the bodies of the executed. The funeral took place on June 2nd.

History of the relics

The burial of the two saints is mentioned in the Martyrologium Hieronymianum ; from this source comes the information that Marcellinus was a priest. The third milestone on the Via Labicana is indicated as the burial place . From the graffiti and a large fresco discovered in the catacomb there , one can conclude that the tomb of the saint was an important pilgrimage destination as early as the 4th and 5th centuries. Pope Damasus I dedicated a funerary inscription to them. Emperor Constantine had a large basilica built over the catacomb ; His mother, St. Helena, was buried in the attached mausoleum .

The relics of St. Marcellinus and Petrus were stolen by Einhard in Rome in 827 and first brought to Michelstadt and later to Ober-Mühlheim in Hesse. This was then called Seligenstadt .

A later translation of relics is documented for the year 1253, when Pope Alexander IV moved relics to a Roman church on today's Via Merulana, which is consecrated to the two martyrs . Peter and Marcellinus are usually represented with the attributes of a martyr's palm , sword, cross or book.

The June 2 is in the Catholic Church ( not offered of Sts) commemoration. Peter and Marcellinus. In Mainz, the transfer of the bones of both saints is commemorated on October 20th .