The single cell Ammonia tepida in the phase contrast method

The phase contrast method (from Greek φασις, phasis "appearance" and Latin contra stare "to stand in opposition") is an imaging method in light microscopy . This makes use of the fact that, in addition to the amplitude , the phase of light waves also changes when they pass through a medium, depending on its refractive index . In this way, it is possible to directly image structures that have only a low intrinsic contrast and would only be visible with bright field microscopy with artificial coloring.

Phase contrast microscopy is widespread in the examination of biological samples in which the object parts differ only slightly in their light absorption but in their refractive index. The phase contrast method was developed in 1932 by the Dutch physicist Frits Zernike and introduced into microscopic practice in 1941 by the Jena Carl Zeiss works . In 1953, Zernike received the Nobel Prize in Physics for his discovery .

When viewing in bright field, only areas in the image that absorb light to a certain extent in comparison to the surroundings appear clearly visible. Either through general light absorption (darkening) or through spectrally specific light absorption (natural colors). Such objects are also called amplitude objects.

More or less clear and colorless objects have little effect on the amplitude of the incident light and only appear visible if, as an exception, they have a very strong difference in the refractive index compared to the surroundings. As a rule, such objects have a very poor contrast, since the human eye cannot perceive phase differences as such. Since such objects, in contrast to amplitude objects, do not produce any significant difference in the amplitude of the incident light, but only a difference in phase, they are also called phase objects.

Methods of increasing the contrast

There are several methods of increasing the contrast. For example, individual objects or their components are specifically colored with dyes . Another method is that illumination to reduce by the iris of the illumination apparatus (the condenser narrowed). As a result, parts of the object with different refractive indices are displayed with greater contrast. However, this method has the serious disadvantage that the resolution of the image is greatly reduced, because the resolution of the microscope is dependent on the numerical aperture of the object illumination. In addition, it is difficult to visualize living biological material using artificial coloring, since many cells perish as a result of the coloring agent.

Principle of the phase contrast method

The phase contrast method from Frits Zernike uses differences in the refractive index and the thickness of the object to generate a light-dark contrast without significantly reducing the illumination aperture and thus the resolution of the microscope. Since light propagates at different speeds in media with different refractive indices, there is a phase difference when passing through an object that is optically denser than its surroundings compared to the light that does not pass through this object.

In order to be able to represent this phase shift in brightness differences, a phase ring in the objective and a ring diaphragm in the condenser lens are built into a phase contrast microscope . The ring diaphragm limits the incidence of light on the sample to a certain angle of incidence. If there is no specimen under the microscope, all of the background light falling through the ring diaphragm hits the phase ring. This consists of a material that attenuates the light and at the same time shifts its phase by 90 °.

However, if a preparation, for example a sample with transparent cells, is brought into the beam path, the light is partially deflected at the structures of the cells. In contrast to the undiffracted light, however, this diffracted object light predominantly does not run through the phase ring and is accordingly not influenced by it. However, the diffraction in the sample also causes a phase shift depending on the refractive index.

In a method that is seldom used, the phase ring is dimensioned in such a way that the contrast is reversed even with conventional objects, i.e. they appear light on a darker background; this is known as negative phase contrast .

By using the phase contrast method, the resolution of a microscope is not improved beyond the diffraction limit . 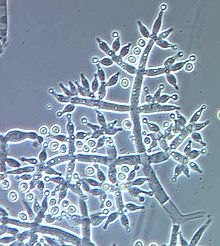 The phase contrast method is most often used in light microscopy of biological objects. In particular when observing cells that are almost invisible in a normal light microscope, high-contrast images result without the need for staining.

When pollen analysis of the phase-contrast method can also fine structures of the surface with the help of pollen grains are made visible.