The title of this article is ambiguous. For further meanings see pint (explanation of terms ) . For information on Austrian politicians and lawyers, see Kurt Pint . 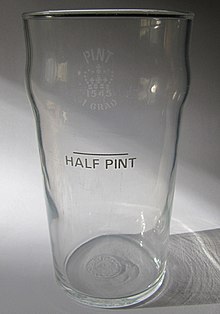 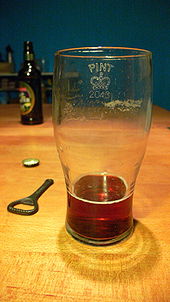 With typical pint glasses there are no serving dimensions , but a pint is reached when the edge of the glass is closed.

The Scottish pint had different values:

The French pint varied from region to region:

Half a pint was called chopine , the quarter pint demi-fetier or 1/5 posson and the tenth pint demi-posson .

Until the present day u. a. in the UK beer and cider pint and halbpintweise served. Depending on the manufacturer, milk is also available in retail outlets in pints and in metric quantities.

The standard volume of electric kettles first and especially popular in the UK is nominally 1.7 liters, but actually 3 pints. Coffee machines for the catering trade by American manufacturers that are sold in the EU also often have water tanks with “crooked” (i.e. liquid pint- sized) volumes.

In Australia, since the switch to the metric system, the half liter has been referred to as (metric) pint , as has been the case in the French catering industry since the early 2000s. Beer is now served in 570 ml glasses in Australia, which is close to the original 568 ml for the Imperial Pint, and in South Australia in 425 ml glasses too.

In Germany, serving measurements in centiliters and liters are common. The volume specification “pint” or “pint” is not permitted for commercial dispensing ( Section 27 of the Measurement and Calibration Ordinance ).

Colloquially, the word “Pinte” in German is often used as a synonym for the term pub . In Flanders , pint is the name of a pilsner, served in 250 ml glasses. In Cologne, the pint was developed as a unit of measurement for alcoholic beverages.