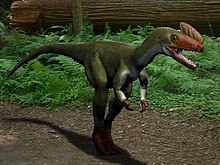 Proceratosaurus was a small, light, bipedal carnivore about three meters long . So far, only one skull with a jawbone is known, which comes from the Middle Jurassic layers ( Bathonium ) of the Great Oolite in Gloucestershire , England . Although the top of the skull is very incomplete, a head ornament was proven. Most of the time, a small horn is suspected that sat over the nostrils - but it could also be a crest, such as is found in Monolophosaurus . The skull is lightly built overall.

The teeth of the front half of the jaw are much smaller and more conical in shape than the teeth of the back of the jaw; the same feature is otherwise only found in the North American coelurosaur Ornitholestes .

The fossils were originally attributed to Megalosaurus in 1910 by Arthur Smith Woodward , who named the animal Megalosaurus bradleyi . In 1926 Friedrich von Huene assigned the bones to a separate genus within the Ceratosauria , which he named Proceratosaurus . Proceratosaurus means "before the horned dinosaur", as von Huene considered the animal to be a forerunner of the Ceratosaurus , which also had a nasal horn. Later phylogenetic studies have shown that it belongs to the Coelurosauria - it could be more closely related to Ornitholestes hermanni (Paul, 1988). Together with Gasosaurus constructus , he is geologically the oldest known representative of this group. According to a new study, Proceratosaurus is the oldest member of the Tyrannosauroidea .