Construction of an electrical quadrupole for the special case of a square arrangement.
The charge of the red points is + Q, that of the blue points is −Q. 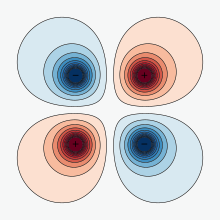 Potential of a real electric quadrupole 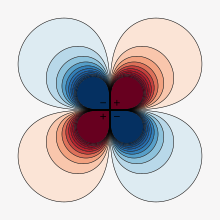 Potential of an electrical point quadrupole

A quadrupole arises from the arrangement shown opposite of two oppositely identical electrical or magnetic dipoles with any distance vector, typically named.

In general, any charge or current distribution can be assigned a second order multipole moment , provided it does not have certain symmetries . For this purpose, the actual potential is approximated by a Taylor expansion . This results in this multipole expansion u. a. also a quadrupole moment .

An electric quadrupole can consist of two equally large positive and two equally large negative charges that form two oppositely equal dipoles. In the simplest case, the four charges are located in an alternating arrangement at the corners of a parallelogram (usually even a square ).

The definition is mathematically precise by means of a limit value process known as "quadrupole limit" , in which the area of ​​the parallelogram converges to zero , while at the same time the charge strength of the charges at the corners of the parallelogram diverges in such a way that the product remains constant, for example where the constant should be positive.

In the transition to the last equation, the Taylor expansion was used and terms of the order of magnitude were neglected.

Obtained from the multipole with the Kronecker delta the quadrupole moment tensor with SI unit C · m²:

or for continuous load distribution :

It can be seen that the quadrupole tensor is symmetrical and without a trace. Due to the symmetry, only three of the six off-diagonal elements are independent, the lane clearance limits the three diagonal elements to two independent ones. The nine entries are therefore restricted by five degrees of freedom, so that the calculation can often be shortened.

Alternatively, the potential can also be represented as:

In practice, each arrangement of four alternately polarized electrodes is abbreviated to “quadrupole”, even if it does not generate a pure quadrupole field.

Another application of an electric quadrupole is the radio frequency quadrupole accelerator .

A spherical magnetic quadrupole field can be generated , for example, with a Maxwell coil .

In contrast to electromagnetism, there are only positive charges for gravitation , the masses . Therefore, a gravitational quadrupole cannot be defined using two dipoles as above. Nevertheless, mass distributions have a quadrupole moment, for example the earth, because it is not a perfect sphere: The flattening of the earth means that compared to an exactly spherical mass distribution (pure monopole) there is "missing" mass at the poles and an "excess" at the equator ("Equatorial Bulge"). Some celestial mechanical phenomena, such as the precession of the earth's axis and the dynamic development of the orbital elements of satellites, can be described with the resulting quadrupole moment.

Similarly, higher multipoles can be treated, so-called octupoles, for example by alternating point charges on the eight corners of a parallelepiped , e.g. B. a cube with edge length  a , with the "octupole limit"   (or more generally: a single 2 l pole is approximated by superimposing two displaced 2 ( l −1) poles with opposite signs ).