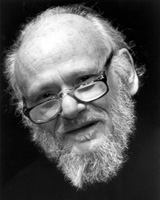 Shapey studied violin with Emanuel Zeitlin and composition with Stefan Wolpe . In 1954 he founded the Contemporary Chamber Players at the University of Chicago, with which he performed contemporary works. After teaching at the University of Pennsylvania from 1963 to 1964 , he became professor of composition at the University of Chicago , where he worked until his retirement in 1991. His students included u. a. Gerald Levinson , Gordon Marsh , Lawrence Fritts , James Anthony Walker , Frank Retzel , Jorge Liderman , Jonathan Elliott, and Deborah Drattell . He also worked as a guest conductor at various orchestras, a. a. the Chicago Symphony Orchestra , the Philadelphia Orchestra , the Jerusalem Symphony Orchestra , the London Symphony Orchestra and the London Sinfonietta . He became a MacArthur Fellow in 1982, a member of the American Academy of Arts and Letters in 1989, and the American Academy of Arts and Sciences in 1994 .

He composed more than two hundred works, including a symphony , a symphonic poem and an orchestral fantasy, several concerts including a violin concerto and a concerto for clarinet, violin, cello, piano, tom-tom and bass drum, chamber music works and piano pieces, a cantata and other vocal works as well as songs for female voices and tape.