Coat of arms of the empire of Reichenstein

The Reichenstein empires were a knightly family that was first mentioned in 1166/79 with Rudolf Dives. The family owned property in the Basel area , Sundgau and the southern Black Forest and consisted of fiefs from the Dukes of Austria , the Bishop of Basel and the Margraves of Baden .

The family was in the service of the bishops of Basel , held the office of treasurer from the beginning of the 13th century and received the Reichenstein Castle near Arlesheim from the Bishop of Basel as a fief in 1250 . The Reich von Reichenstein were represented in the city council of Basel from the 13th to the middle of the 15th century , provided six mayors of Basel, a bishop of Basel and a rector of the University of Basel . Since the 15th century, the family members increasingly entered the service of the Habsburgs and the Margraves of Hachberg and Baden . The family owned property in the Basel area, Sundgau and the southern Black Forest and consisted of fiefs from the Dukes of Austria, the Bishop of Basel and the Margraves of Baden. These included Brombach im Wiesental with the Brombacher Castle , Buschweiler in Alsace, Inzlingen with the Inzlinger moated castle and Reichenstein Castle with Arlesheim. Towards the end of the 15th century they acquired the Landskron dominion in Alsace, the Thann pledge in 1457 and the Pfirt pledge in 1503/04 . The Reichenstein empires remained Catholic even after the Reformation and withdrew to their estates in the Black Forest and Sundgau. In 1773 they received the title of baron from the French king. The saying is said to come from the von Reichensteins: My name is Hans Reich von Reichenstein - I am very rich - I know that.

“A slanted black boar pen in gold . On the helmet a crowned golden lion's trunk. ”As a variant, a growing black gold-winged lion. 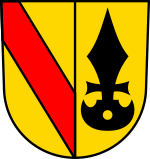